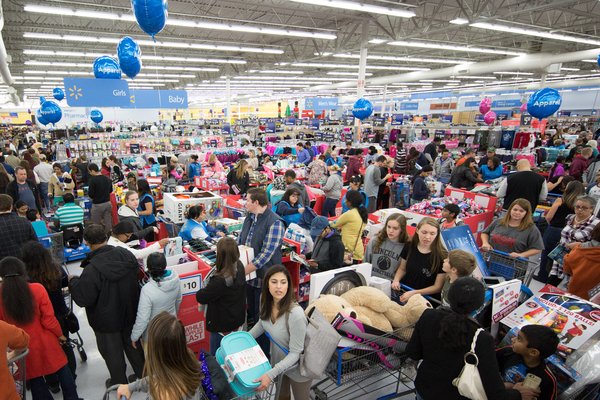 Organizations across the retail landscape are tallying just how jolly American shoppers were over the holiday weekend, with mighty merry spending patterns emerging across all channels.

The NRF says those results emphasize the importance of finding channel-agnostic ways of evaluating how people shop. “Gone are the days when you could measure the success of this weekend by looking at a single metric,” says Matthew Shay, CEO of the Washington D.C.-based trade organization, in a conference call discussing the results. Calling the weekend results “very strong,” he cited good weather and a relatively drama-free news cycle, without distractions like last year’s election or a fiscal cliff.

The International Council of Shopping Centers says that over the four-day weekend, more than 145 million adults spent time at malls, and it calculates they spent on average of $377.50.

Black Friday was the most popular day for in-store shopping, named by 77 million consumers in the NRF study, followed by Small Business Saturday with 55 million consumers. Cyber Monday (81 million) and Black Friday (66 million) were the biggest online days. (The NRF survey, based on responses from some 3,200 adults, is conducted by Prosper Insights & Analytics.

Those tracking online-only sales saw big gains, too. ComScore, based in Reston, Va., says that online spending jumped 22% to $1.57 billion on Thanksgiving Day, and 20% to $2.36 billion on Black Friday, the first time it topped $2 billion. (ComScore tracks spending from desktop computers only.) And Adobe Data reports that

Cyber Monday is the biggest online sales day in U.S. history with $6.59 billion, an increase of more than $1 billion. (But it still pales in comparison to Alibaba, which recently saw $25.3 billion in spending for China’s Singles’ Day.)

It says the holiday shopping season so far has driven $50 billion in online spending, and projects this will be the first year it breaks $100 billion.