M&M's To Return To Super Bowl, After 3-Year Hiatus 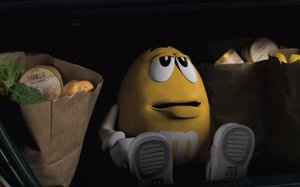 Mars Wrigley announced that M&M’s, which has been absent from the Super Bowl for three years, will be back in 2018, with a 30-second spot.

The ad, from BBDO, will run during the game’s first quarter.

“The Super Bowl is such an iconic event, and we’re thrilled to be bringing M&M’S back to the big game this year,” stated M&M’s’ brand director, Allison Miazga-Bedrick. “Some of the beloved M&M’S spokescandies will be back in action like never before. We’re excited to showcase M&M’S as the entertainment brand that our fans know and love.”

M&M’s last Super Bowl spot, in 2014, “Delivery,” featured the Yellow character expressing typical clueless enthusiasm as Russian mobsters kidnap him, throw him in a trunk (above) and prepare to serve him to party guests.

Skittles will be back for Super Bowl LII, with plans to be announced at a later date.

Snickers, which was in last year’s Bowl with a spot featuring Adam Driver, won’t return in 2018, but Mars says it has a “big year” planned, including the launch of three new flavors in June.