TrueCar Distinguishes Itself From Competition 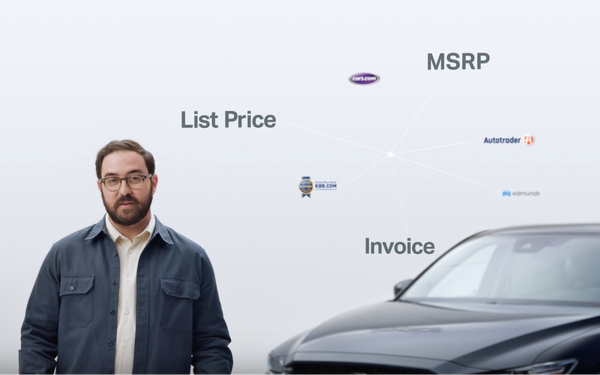 TrueCar is drawing a distinction between itself and its competitors in the digital automotive marketplace by showing how it can help consumers fight information overload when buying a new or used car.

Fifteen- and 30-second versions of “No Confusion” introduces TruePrice, which shows buyers what they'll pay, including all fees and accessories, before going to the dealership. With TruePrice, consumers see what others in the area paid for the same car and Certified Dealers are able to set their prices competitively so that consumers get the best deal.

“The enemy of the car buying process is not the dealer,” says Lucas Donat, chief brand officer of TrueCar. “It’s the morass of information available online that confuses consumers.”

In addition to the TV spots, the campaign includes national radio spots across news, sports, podcasts and a home-page refresh. Creative was developed in-house and it was produced by the company’s long-standing partner, Sandwich Video, Donat says.

The spot is being tested across cable and broadcast, including the brand’s top-performing cable networks and NFL programming on CBS and Fox. “We’ll examine test results to determine a longer-term media mix/plan,” Donat says.

The ad aims to draw a distinction between other third-party automotive websites and TrueCar, Donat tells Marketing Daily. Additionally, this spot is designed to answer the age-old question, “How do I know if the price I see on this car is a good price?”

“With the introduction of TruePrice you can now see what others paid for the car you want and get an upfront price from TrueCar Certified Dealers that will include all fees, accessory costs, and incentives,” Donat says.  “TruePrice allows you to see exactly what you’ll pay at the dealership.”

The ad departs from TrueCar's previous marketing efforts by shooting in front of a white background, simplifying the messaging and creating a billboard hero effect where the graphics tell more of the story than the spokesperson, Donat says.