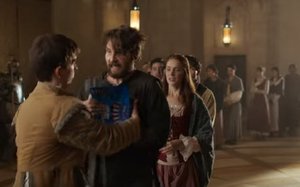 The latest Bud Light TV spot again extends its “Game of Thrones”-spoofing creative — and again features the “Dilly Dilly” phrase that’s taken off on social — this time to promote its “Super Bowl Tickets for Life” Sweepstakes.

The “Handouts” TV ad (below), which debuted yesterday during Fox’s NFL football broadcast and NBC’s “Sunday Night Football,” will continue to air on NFL and other sports programming through Jan. 22, when the sweeps entry period ends, according to a brand rep.

In this second year of the sweepstakes, fans can enter for chances to win four tickets to each Super Bowl for up to 30 years, starting with 2018’s game, by buying specially marked packs of Bud Light and submitting the provided codes by text message, online or in person.

The “Dilly Dilly” phrase was first used by Bud Light in August, in a “Banquet” ad under the brand’s “Famous Among Friends” marketing platform. To date, that spot has been viewed more than 1.64 million times on Bud Light’s YouTube page.
The brand has used the catch phrase in other creative several times since.

A “Pit of Misery” spot launched on Nov. 22, also incorporating the phrase, has so far garnered 260,000-plus YouTube views.

On the same day, Pittsburgh Steelers quarterback Ben Roethlisberger gave “Dilly Dilly” the kind of free publicity brands pray for, when he spontaneously shouted it out during a game against the Tennessee Titans.

Bud Light also made the most of another publicity opportunity early this month, when Minneapolis-based Modist Brewery released a new Mosaic Double IPA called “Dilly Dilly.”

Instead of unleashing lawyers to protect its phrase, Bud Light posted a video on its Facebook page showing a town crier dressed in medieval garb objecting to Modist’s beer name, reading off of a parchment scroll.

“We are duly flattered by your royal tribute,” said the proclamation. “However, ‘Dilly Dilly’ is the motto of our realm. So we humbly ask that you keep this to a limited addition one-time-only run. This is by order of the king. Disobedience shall be met with additional scrolls, then a formal warning, and finally, a private tour of the pit of misery.”

The tongue-in-cheek rebuke paid off in positive response from beer fans, another flood of video views — and a promise from Modist to rename the IPA “Coat Tails” as of its next batch.

In a new analysis, YouGov BrandIndex reports that Bud Light “began a three-week [Buzz score-based] perception run-up at the end of October, hitting its highest mark with men since the February 2016 Super Bowl,” but suggests that the timing may point to more impact from “non-Dilly Dilly ads” under the brand’s “Famous Among Friends” platform that “aired during two high-profile events on Oct. 22: a rematch of the last two Super Bowl teams, the Patriots and the Falcons, and the Season 8 premiere of ‘The Walking Dead’ on AMC.”

However, the analysis does not note the possible impacts of the Oct. 12-released "Dilly Dilly" digital ad noted above. Also, YouGov allows that “even if the ‘Dilly Dilly’ part of the campaign seems to be more hype than reality, Bud Light Ad Awareness benefited from all of their executions this fall.” The awareness score rose from 22% of all U.S. men in August to a peak of 28% by mid-November. That matched the brand’s second-highest Ad Awareness level of the year, just short of its post-Super Bowl mark, according to the research firm.