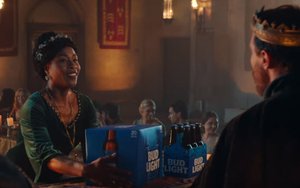 Bud Light debuted the first in a new batch of TV spots in its “Famous Among Friends” campaign this past weekend.

Like many other current ads, the beer’s “Banquet” ad seems inspired by the “Game of Thrones” craze — although the olden-days court setting depicted here is considerably less gritty than the settings in the HBO series.

The ad — showing a king who’s less than pleased with a courtier who offers a gift of spiced honey mead wine instead of Bud Light — "injects the brand's fun, humorous personality into our friendship positioning by rolling back the clock to medieval times to show that dependable friends always bring enough Bud Light to the banquet for everyone to enjoy," says Andy Goeler, Bud Light’s VP of marketing.

So far, each of the TV ads released under Wieden + Kennedy New York’s “Famous Among Friends” campaign has taken a quite different creative approach, although Goeler says they all aim to convey the message that Bud Light, like good friends, can always be counted on.

The first, launched in late January, showed funny but believable scenes from a long friendship between two Millennial guys. The second ad, aired during the Super Bowl, resurrected the brand’s Spuds Mackenzie mascot as a ghost urging a young guy to go to a party and enjoy friends rather than sit at home.

Meanwhile, earlier this month, the Bud Light marketing team launched a series of straight, non-humorous ads stressing the brand’s simple ingredients and quality, which will run simultaneously with the friendship ads.

The quality ads are tied into the campaign theme with messaging at the end: “Here’s to the beer you can always count on.”