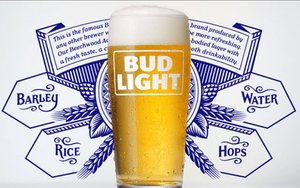 Bud Light is supplementing its relationship-themed “Famous Among Friends” campaign, launched in January, with new creative focused on the beer’s quality and simple ingredients.

The brand is debuting two new TV spots on Aug. 10, during the Denver Broncos vs. Chicago Bears game.

The other, “Complex” (below), takes a humorous jab at beers that “have a lot of ingredients” — think craft beers — showing beers being served with all kinds of garnishes (including a lobster claw) as a contrast to Bud Light and its four ingredients.

Both ads end with the message: “Here’s to the beer you can always count on. Brewed to be America’s favorite light lager.”

While the brand’s release described the new creative as “the next chapter” of “Famous Among Friends” — all of the ads are from Wieden + Kennedy — in practice, the rational, quality/ingredients approach will be augmenting the emotional, funny “friends” creative.

Indeed, the two sets of creative will be running simultaneously in order to tap their synergy and appeal to different segments within Bud Light’s large, mainstream target universe, reports Andy Goeler, Bud Light’s VP of marketing. The two new spots will run for a few months before new quality/ingredients spots are rotated in, and new “friends” spots will be launching in about three weeks, he tells Marketing Daily.

Goeler, a longtime Anheuser-Busch executive who joined Bud Light five months ago, isn’t down on craft beers, he stresses. In fact, he was most recently overseeing one of A-B’s own craft brands, Goose Island.

Bud Light saw sales-to-retailers declines in the “mid single digits” in full-year 2016 and during this year’s first half, according to A-B’s reports.

Goeler says that the “Complex” spot isn’t meant to put down craft beers. “There are many types of beers out there, and some consumers love craft beers and those that have a lot of ingredients,” he says. But having seen crafts and other types and brands of beers succeed by responding to consumers’ increased interest in ingredients, “when I came on at Bud Light, I thought that we should tell this brand’s own ingredients and quality story,” he says. The point is to drive home that Bud Light’s quality is exactly what’s made it the leading brand.

Consumers are particularly responsive to the creative’s identifying Bud Light as “light lager,” Goeler adds. Light lager is respected among beer aficionados because the brewing process has to be meticulous, he says: “With light lager, you can’t hide behind the added ingredients.”

Meanwhile, the “friends” ads have been scoring well on key consumer indicators, including “likeability,” he says.