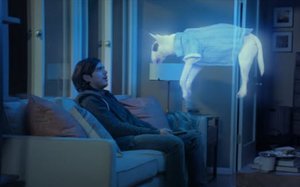 And in another surprise, the spot, to run in the fourth quarter, is 90 seconds long rather than the originally announced 60 seconds.

Anheuser-Busch InBev purchased a total of 3.5 minutes of ad time during the game for four brands, thinking that it might “give back” 30 seconds, but ultimately decided to keep that time in order to run a 90-second Bud Light ad, according to a brand rep. Budweiser is running a 60-second ad, and Busch and Michelob Ultra are each running 30-second ads.

The Bud Light ad is, as previously reported, positioned as part of the brand’s new “Famous Among Friends” campaign.

In a narrative arc lifted directly from “A Christmas Carol,” Spuds’s ghost appears to a lone man. In this case, it’s a Millennial guy named Brian, whose sin is not avarice, but an inexplicable desire to stay home for the evening rather than go to a party.

The dog-ghost announces that his “soul can’t rest when people don’t drink Bud Light with friends,” then proceeds to show Brian scenes of recent beer-drinking get-togethers he’s missed and the one that he’s missing now. Having seen the light, Brian is only too happy to take a six-pack of Bud Light proffered by the Bull Terrier’s spirit and join the party.

The dog-ghost is voiced by actor Carl Weathers, of “Rocky” fame.

“There’s no one better than Spuds to celebrate Bud Light, and remind everyone that we don’t just make beer, we enable moments that build and strengthen friendships,” said Bud Light VP Alex Lambrecht.

The new Super Bowl ad and overall campaign are from Wieden+Kennedy New York.

As previously reported, the campaign’s first spot aired during the AFC and NFC Championship games.