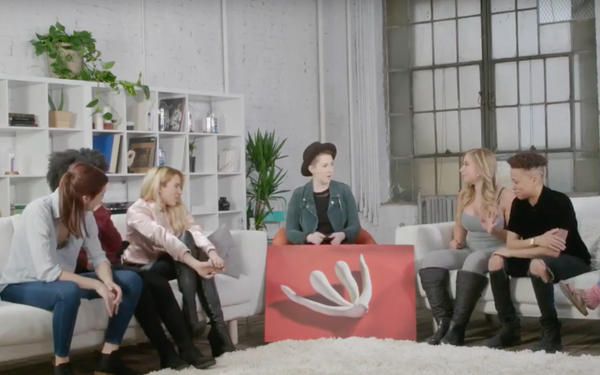 Intercourse requires two partners, but when it comes to heterosexual interplay, many condom advertisers are leaving one party out of the conversation.

Despite the fact that women have as much (if not more) stake in avoiding sexually transmitted diseases and pregnancy, much of the category’s advertising is focused on men and their enjoyment and pleasure. LifeStyles is working to change that via a new effort to include women in the conversation about sexual health. Starting this week, the “Equal Play” campaign features six women speaking candidly with clinical sexologist Rena McDaniel.

“[As an industry], we’re always talking to men, and it is a product that men wear,” Carol Carrozza, vice president of North America marketing for LifeStyles, tells Marketing Daily. “But it is a shared experience, and no one is really talking to women.”

Hosted on the brand’s site and running in social media channels, the short videos feature the women talking about sexual pleasure, turn-ons (including watching pornography) and the disconnect between the ways men and women (and boys and girls) are taught to think about sexuality. In one video (embedded below), the women watch a number of different condom ads (presumably from competitors) to gauge their reactions. Their expressions range from aghast to appalled to resigned. “I think it’s a play on the classic trope of ‘Women make man food. That’s what women are for, right? [Sex] and to make men food,’” says one.

“There’s a perception that women don’t buy condoms,” Carrozza says. “We’ve found that they are doing the buying, too.”

While the campaign aims to bring women into the condom conversation, it is not necessarily a departure for the brand, which has striven to be inclusive of all people over the course of its history, Carrozza says.

“Our approach has always intended to resonate gender neutrally,” she says. “We’re not the adolescent brand. We don’t giggle or have the train going through the tunnel. That’s why this [approach] resonates so well with our brands.”

In addition to the social media channels, the brand is also working with social influencers to broaden the conversation around condom use, particularly as data shows overall condom sales declining. The time is right to for such an effort, as women are having a moment to assert their voices on all topics, Carrozza says.

“The idea is to create a cross-gender discussion that condom usage is everybody’s responsibility,” Carrozza says. “The time is right. Women are empowered. They have a voice, and they’re buying more [sexual] products. The time is right that both genders should get equal play.”