When The Medium Is The Message, Not A Political Ad 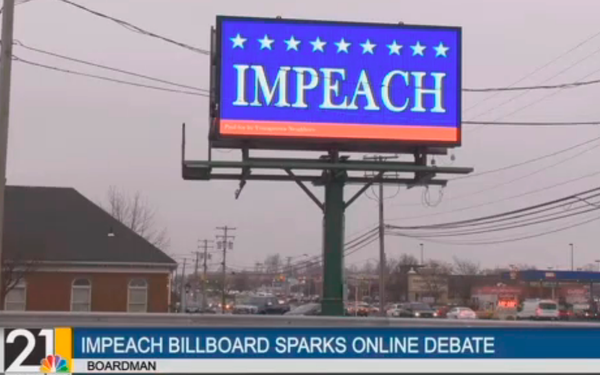 It is a simple grassroots message paid for by local citizens expressing their concern about the Presidency.

That’s what the citizens of a neighborhood in Youngstown, Ohio, say about the ad they kicked in to buy on a local billboard. The content is a one-word message: "IMPEACH."

"It's certainly not a political ad. It's just one word, and it could be any word in the English language. It just happens to be a word that has impact in this day in age and just about everyone who sees it knows exactly what it means," asserted Richard Hahn, owner and founder of Youngstown-based Keynote Media Group, in an interview broadcast by local NBC affiliate WFMJ.

While the Youngstown neighbors who paid for the billboard message on South Avenue near Route 224 declined to be interviewed, Hahn said the ad was not subject to conventional political-advertising regulations.

Though it’s unclear how many grassroots citizen efforts are paying to advertise similar messages, billionaire Tom Steyer has been inundating the airwaves with his “Need To Impeach” campaign, mainly on TV and digital. But his efforts also include at least one billboard ad in New York City’s Times Square.