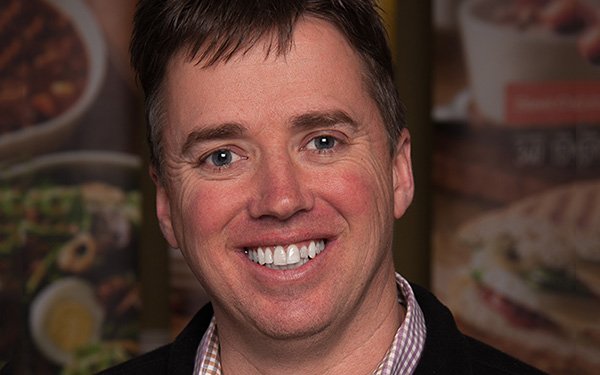 When Chris Hollander says that working for Panera Bread is “kind of a marketer’s dream,” he’s referring to the strategy that guides the brand’s interaction with existing and potential customers, as well as its commitment to food quality, transparency and the overall customer experience.

Hollander’s track record over nearly eight years at the company attests to a mutually beneficial match. Panera founder Ron Shaich — now executive chairman, having recently stepped down as CEO — has cited marketing’s effectiveness as one of the critical drivers of Panera’s remarkable growth.

The $5-billion company generated annualized stock returns of 25% for the 20 years leading up to its $7.5-billion acquisition in July 2017 by family-held JAB Holding Co. In its final public quarter, Q1 2017, its comparable-store sales were up 5.3%, outperforming the industry’s Black Box composite index by 690 basis points.

Hollander — who joined Panera as vice president of marketing in 2010, became head of marketing in 2014 and senior vice president of marketing in 2016 — says he and his 65-person team follow the Shaich principles that guide the company as a whole: Tell the truth, know what matters, and get the job done. “Did the effort achieve the intended outcome? Did it matter to the consumer? It’s amazing what a great filter that is when you apply it to everything you do,” he says. “It’s all about understanding customers’ needs and what you can do to improve their lives.”

Hollander is proudest of marketing’s contributions to Panera’s multi-year drive to evolve its food from “real” (as opposed to highly processed) to “100% clean” (free of all artificial ingredients).

He and his colleagues sought direction from “superfans” and key health and nutrition influencers in Washington, D.C. before Panera publicly declared a new mission in 2014: achieving a 100%-clean menu by the end of 2016.

In 2016, Panera’s mission-accomplished campaign used an anthem video/TV ad contrasting processed fast food with its own now “100% Clean” offerings, supported by digital, social, print, out-of-home and PR. That was followed with high-profile PR and social campaigns promoting its move to posting the sugar content of all drinks on in-store signage and drink cups.

A new, two-year campaign for another innovation — offering kid-size portions of all items on its menu — drove high social engagement with videos of kids mystified by the ingredients in competitors’ kids’ meals.

Current strategy includes a growing focus on digital and social media, influencers and earned media. This aligns with media consumption patterns, but also with Panera’s conviction that “it’s always more powerful for people to hear about our efforts from friends or the press — someone other than Panera,” says Hollander.

Panera has demonstrated buzz-generating mastery on multiple fronts. Shaich has used videos and open-letter ads in key publications to challenge competitors to follow Panera’s clean initiatives. Marketing built a network of volunteer superfans/influencers who “help us shape where we’re going,” as well as post about the brand and the new items they get to sample, says Hollander.

Panera cleverly paired the launch of its own line of lower-sugar beverages with the more newsworthy angle about posting the sugar content of all beverages, generating heavy press coverage for both. It also generated 1 billion-plus net social impressions “at very minimal cost” through content created by influencers, including “The Big Bang Theory”’s Kaley Cuoco.

All of which has made Panera a “reference brand” that tends to be mentioned whenever competitors announce wellness initiatives — pure earned-media gold.

Hollander’s current focus is fully leveraging the extensive consumer data from the MyPanera loyalty program, to roll out one-to-one marketing.

Panera already generates half of its transactions from its 28 million loyalty members, 13 million of whom have opted in to receive emails. And it’s already moved the sales needle with just a few applications to date, like alerting members about new food offerings that fit with their flavor profiles.

"Personalization is the key to our short- and long-term success, including driving awareness of new food offerings and platform/channel initiatives,” stresses Hollander. The latter — collectively dubbed “Panera 2.0” — include home and business delivery, rapid pickup, and catering, all accessible through the latest mobile ordering options, such as Google Assistant. Fully 26% of Panera’s orders are generated digitally — exceeding all but the leading pizza chains.

Hollander joined Panera with 11 years’ experience at PepsiCo under his belt, where he earned both a PepsiCo Top Performer Award and (through the PepsiCo/Unilever tea partnership) Unilever’s Global Marketing Excellence Award.

Prior to PepsiCo, Hollander worked at Interactive Sports, which was among the first start-ups to focus on bringing digital technology to the sports marketplace. “We flamed out pretty quickly, but the entrepreneurial spirit that was alive there has driven me ever since,” he says.