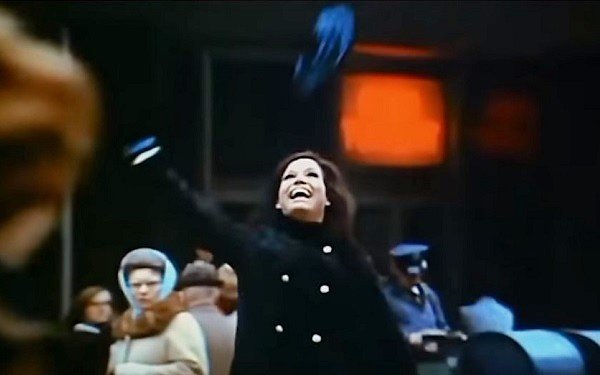 For those of us of a certain age, a light shines brightly in a cherished corner of our memories. It's television, a light with a vague flicker from a convex screen that would be square if not for the curves at all four corners.

In the light of this window on the world trod a parade of immortals seen by tens of millions on just three networks. It was long ago, yet for many of us, it still feels close at hand. And when the legends die, we remember them as if it were only yesterday.

What more can one say about Mary Tyler Moore? She was 80 when she died in January, but in our memories, she will always be around 30 and indistinguishable from the character she was best known for playing, Mary Richards of WJM-TV in Minneapolis -- striving, ambitious, strong and sometimes brittle -- an everywoman for the ’70s and for the ages, brought to us in 576 lines of definition.

Across our field of vision jumped Gomer Pyle, one of the most luminous TV characters ever created, and he too was indistinguishable from the artist who played him, Jim Nabors -- right up until the artist opened his mouth to sing and we stared in disbelief at the depth and talent of this man.

For many of us, no matter how many Batman movies Hollywood manages to make, Adam West will always be the real one.

David Cassidy was a teen idol, but for many of our generation, he was just a lovable big brother on "The Partridge Family."

On "Get Smart," Dick Gautier as Hymie the robot held us spellbound and made us laugh.

In 2017, we lost the consummate TV tough guy, Mike Connors of "Mannix" -- and the savviest of all confidential secretaries, the incomparable Barbara Hale of “Perry Mason.”

From the convex window came the sights and sounds of a generation -- the banter between TV husbands and wives, laughter and applause, the voices of cartoons and the unforgettable exhortation from Monty Hall on "Let’s Make A Deal" to pick "Door No. 1! Door No. 2! Or Door No. 3!"

The writers who gave the great ones their words included Bob Schiller, writer of 53 episodes of "I Love Lucy" and so much more, and Stan Hart, one-time head writer on "The Carol Burnett Show."

June Foray gave voice to an animated universe. She was Rocky the Flying Squirrel, Nell Fenwick from "Dudley Do-Right," and so many more in a career spanning 70 years.

Joe Harris was an adman turned illustrator and animator who created Underdog, Tennessee Tuxedo, the Trix rabbit and so many more classic cartoon characters.

Chuck Barris came out of the suburbs of Philadelphia to create two game shows -- "The Dating Game" and "The Newlywed Game" -- that helped define their era. He also created "The Gong Show," for which we forgive him.

Roger Moore became world-famous as James Bond, but for many of us, he was -- and always be -- Simon Templar, "The Saint."

The TV judges of so many afternoons have come and gone, but the one most people will long remember most was the original "People’s Court" judge, Joseph Wapner.

For a couple of years, lovable Dorothy Mengering of Indiana was a cheerful counterpoint to her grouchy son David Letterman on his CBS show.

Speaking of which, none of us who made it an annual rite of the holidays in December will ever forget Jay Thomas’ yearly recital of his famous "Lone Ranger" story on "Letterman," considered by many to be the best late-night television tale ever told. Good-bye, Jay -- it was nice to know you.

What can one say about the laughter that once emanated from the small speakers mounted in the plastic and faux-wood TV cabinets of yesteryear? We can say good-bye to Bill Dana, Don Rickles and Jerry Lewis.

"Hi, I’m Robert Osborne": words heard recited before countless movies on Turner Classic Movies by a man who became a TV classic himself by representing everything TV could be, and sometimes still is.