Why I Reported Trump To Twitter -- And Why You Should, Too 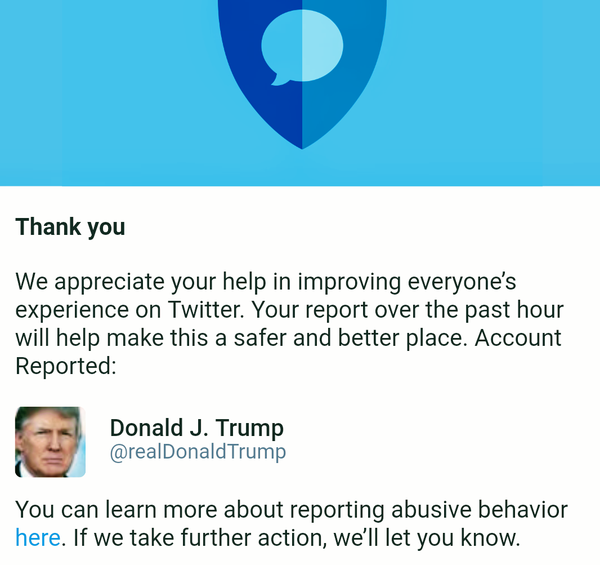 I just reported an abusive tweet by the President of the United States. Twitter says it is investigating the matter. I doubt it will take any action based on my sole report, but I encourage others who have Twitter accounts to do the same.

There have been many tweets made by Donald Trump since he became President that I have found abusive. But it was the one he sent Tuesday comparing the size of his “nuclear button” to Kim Jong-un’s that prompted me to report it as “abusive or harmful” to Twitter.

Whether he was deranged or just jesting -- or even using it as a way to spin the media -- Trump’s use of social media is no joke. It is abusive and harmful to my personal psyche, and I believe America’s, if not the entire world’s.

It’s been nearly a year since I first blogged that I thought we should have a law preventing POTUS from having a personal social-media account capable of communicating one-to-masses for a variety of reasons. I am more convinced of that one year later.

The real-time power of Trump’s massive Twitter and other social-media followers is a disruptive game-changer that was not envisions by the framers of the Constitution. And just the way more contemporary legislators created the 25th Amendment to deal with Presidential instability in the nuclear age, I think it’s time they do the same in the Twitter age.

I’d like to think that Twitter itself would police and self-regulate Trump’s tweets and if not block @realDonaldTrump, at the very least moderate it.

One baby step is to simply require Trump to use @POTUS instead, because then we would truly know they are official White House statements, and not impulsive disruptions that the White House communications team can deny, “walk back,” or spin as just letting Trump be Trump.

I don’t expect those things to happen anymore than I expect Congress to draft new legislation that would make that a law. But I think they should.

I believe in the First Amendment. I believe in free and open media markets, even when they are disruptive. I don’t believe the President of the United States should use them to wage psychological warfare and hold us all hostage.

Whatever his emotional needs are for sustaining this sort of behavior, Trump is no longer a candidate campaigning for office. He is the President of the United States — and he should act that way. And if he can’t, we should prevent him from acting in a way that is not. If you agree, please report Trump’s tweet to Twitter. 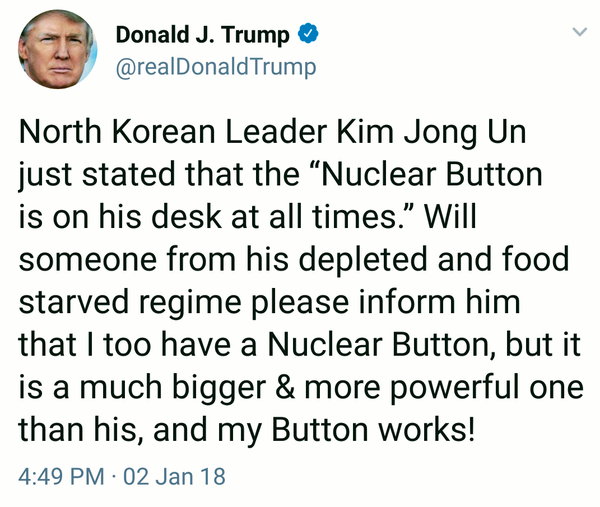 politics, social media, twitter
21 comments about "Why I Reported Trump To Twitter -- And Why You Should, Too".
Check to receive email when comments are posted.
Read more comments >
Next story loading