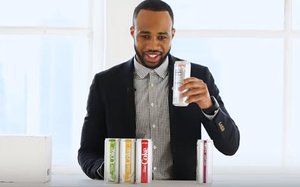 The Coca-Cola Company is betting that the big makeover will help rejuvenate sales for the 35-year-old brand — which saw its dollar sales fall by mid-single digits in its most recent quarter, and its sales by volume drop 4.3% in 2017, per a Beverage Digest estimate cited by Fortune. Diet Coke remains the third-largest carbonated brand in the U.S., behind regular Coca-Cola and regular Pepsi.

The brand is aiming to win over millennials with sleeker-looking cans and adventurous flavors — Ginger Lime, Feisty Cherry, Zesty Blood Orange and Twisted Mango — but retain its core base of female Baby Boomers by not tampering with the taste of the original variety. (It’s even using the hashtag #SameTaste, along with #SoManyFlavors.)

The new Diet Coke 12-ounce cans are the same shape and size as the cans used by the company’s Dasani Sparkling brand, and the new Diet Coke flavors boast the same sweeteners (aspartame and acesulfame potassium) that have helped make Coke Zero Sugar a major success story since its introduction this past summer.

The new flavors and cans (which join existing packaging sizes/formats for the brand) will be in U.S stores by the end of this month and in Canadian stores next month. Coca-Cola reportedly has no plans to introduce the innovations in other countries.

According to Rafael Acevedo, Coca-Cola North America’s group director for Diet Coke, Diet Coke and Coke Zero Sugar are designed to be complementary. “For people looking for an option that tastes like a Coca-Cola, Coke Zero Sugar is a great choice. Diet Coke and its expanded flavor portfolio provide a crisper taste and bolder flavors,” he stated.

The two-year Diet Coke innovation process was “fueled by consumer research pointing to younger Americans’ affinity for big yet refreshing flavors in their favorite foods and beverages,” Coca-Cola reports on its website.

“Millennials are thirstier than ever for adventures and new experiences, and we want to be right by their side,” said Acevedo. “We wanted to stay true to the essence of Diet Coke while recasting the brand for a new generation.”

The tagline for the supporting campaign, from Anomoly, “Because I can,” is already being featured in online advertising/search results. The brand is also featuring new Gifs on its Twitter channel and pointing consumers to an all-new website (which, among other things, offers a FAQ section, and a preview of the U.S. cities on the schedule for an upcoming Diet Coke tour).

The marketing elements on display thus far feature male and female millennials of diverse cultural backgrounds. Example: the video below, showing the results when millennials were asked to try the new Diet Coke flavors.