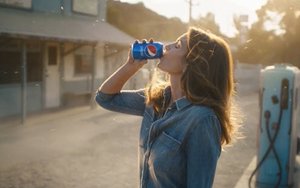 In the original ad, two preteens gawked as Crawford, clad in a tank top and cutoff jeans, pulled up to a gas station in a Lamborghini and chugged a Pepsi purchased from a soda machine. For the punch line, the boys express awe about the beauty of … the new can designs for Pepsi and Diet Pepsi. The ad’s background music: “Just One Look,” originated by Doris Troy in 1963.

Although Pepsi has so far released only a brief, silent teaser video, it revealed in press interviews that the new 30-second ad, dubbed “This Is the Pepsi,” also features Crawford’s 18-year-old son, Presley Walker Gerber.

"Since our brand was founded more than a century ago, Pepsi has stood for a youthful spirit and the choice of a new generation," said Chad Stubbs, vice president, marketing, Pepsi Trademark, North America, in the campaign announcement. "2018 will be a year to celebrate the past while embracing the future; always reminding consumers to do what they love and have a little fun in their lives.”

The campaign, spanning Pepsi Zero Sugar and Diet Pepsi as well as classic Pepsi, will be rolled out to more than 55 international markets and run through 2018.

PepsiCo hasn’t’ revealed the creative agency or agencies behind the new campaign.

Other elements announced today: Pepsi Generations Live pop-ups that will appear during the Super Bowl and other big U.S. events during 2018; limited-edition retro packaging; and a revival of the premium-based Pepsi Stuff loyalty program.