Chief Surgeon A Quack? It's 'The Resident' To The Rescue 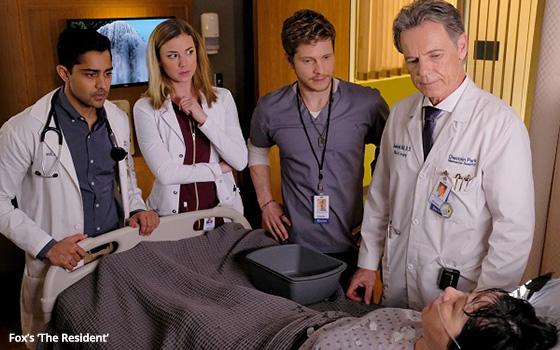 Thank heaven this terrible hospital is fictional. Real-life hospitals would never allow the level of dysfunction and incompetence that thrives there.

I'm kidding, of course. Real-life hospitals are awash in dysfunction, negligence and incompetence -- which might be why TV keeps showing us fictional hospitals that, while flawed, still employ some professionals whose genius is enough to offset the disasters wrought by co-workers who are quacks.

In TV hospitals, most of the patients receive competent, or in many cases, miraculous care, providing a wonderful fantasy for the rest of us who will never have that experience.

In network television’s newest prime-time doctor show “The Resident” -- premiering Sunday night on Fox -- the brilliant young doctors of Chastain Park Memorial may or may not be able to prevent shaky Dr. Scissorhands from wreaking havoc on their patients.

The series even opens with a scene in which the wicked chief surgeon -- played by Bruce Greenwood -- basically kills a patient during a routine appendectomy when he accidentally slices through an artery and the poor guy bleeds to death.

Everyone in the O.R. assisting in the operation witnessed what happened, but Dr. Butterfingers gets them all to agree to an elaborate cover-up anyway.

However, certain staff members at Chastain Park are on to him, including the resident of the title, a swashbuckling young doctor named Conrad Hawkins (played by Matt Czuchry).

Guess what? He’s brash and unconventional, a serial rule-breaker with tattoos who is obnoxious at first, but before long, reveals his commitment and compassion for everyone around him, patients and co-workers alike.

Not that there is anything wrong with building a prime-time hospital drama from the blueprints for numerous such shows that have come before it.

When you stop and think about it, medical dramas have been a staple of television since the Year One, right up there with lawyer shows, police shows and Westerns (the last of which being the only one of the three not still thriving on TV). There is always room for one more medical drama set in a fantasy hospital.

The gimmick of this one is the subplot about the incompetent chief surgeon and his uncanny ability to maintain his position and reputation even when his patients keep dying on him.

One wonders how long it will take for the chief surgeon's enemies to take him down -- half a season, two seasons, more? And when or if they do, what happens to the show then?

Well, we will just have to wait and see, and like a patient in a hospital, hope for the best.