TNT's 'Alienist' Is A Thrill Ride Back In Time 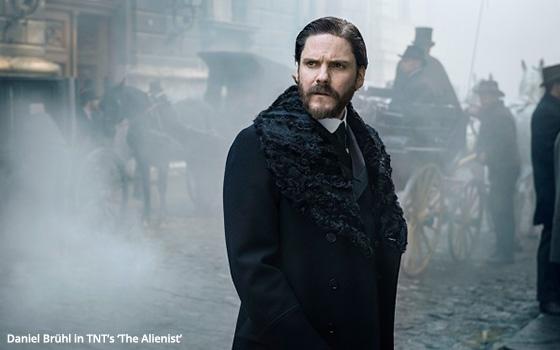 “The Alienist” is a big win for TNT -- a taut, fast-paced crime thriller that effectively re-creates the tumultuous world of New York City in 1896.

The best feature of “The Alienist” -- of many stellar characteristics -- is its authenticity, although the show was filmed in Budapest, Hungary.

Perhaps that city has more contiguous 19th-century buildings still standing than New York does, but the illusion that it is really New York City in the 1890s comes across loud and clear.

“The Alienist” is a pleasure to watch -- which, in case anyone has forgotten, should be a primary goal of any television show. “The word is television,” the great TV sage Joe Franklin once told me. “You have to give them vision.”

Everything else clicks in “The Alienist” too -- the acting, writing, costumes, cinematography, special effects, lighting, décor, props, you name it. This show is a wonder to behold.

This TV adaptation is the first filmed version of “The Alienist,” the novel by Caleb Carr that became a bestseller in 1994.

The title refers to the book's -- and the TV show's -- central character, Dr. Laszlo Kreizler (played by Daniel Brühl, photo above). He is a psychoanalyst at a time when the term “psychoanalyst” was not yet in wide use to describe doctors in his chosen field. Instead, they were called alienists.

Carr's novel established Kreizler as something of a sleuth who insinuates himself in police investigations, usually against the wishes of the police who don't understand his scientific methods. It doesn't help that the doctor often proves them wrong.

In the TNT series, Dr. Kreizler gets involved in the hunt for a possible serial killer whose victims are homeless boys who have been forced into prostitution.

It is a gas-lit world (with some electricity) of horse-drawn carriages, corrupt cops on the take from neighborhood hoodlums, slipshod police investigations and the forcing of confessions from suspects who are beaten until they ’fess up.

Commissioner Roosevelt, however, was a reformer who wanted to clean up the corruption and introduce professionalism in city policing.

He is a character in “The Alienist” too (played by Brian Geraghty), and it is he who grants permission -- with some reluctance -- to Dr. Kreizler allowing him to participate in the murder investigation.

In his investigation, Dr. Kreizler is assisted by a college friend who is a newspaper illustrator (played by Luke Evans), a young woman who is said to be the first-ever female employee of the NYPD (Dakota Fanning) and two brothers who happen to both be police detectives.

Although they are members of the force, the two (Douglas Smith and Matthew Shear) are depicted as social outcasts in the police department because they are Jewish.

In the premiere episode of “The Alienist,” which I watched last week, the characters are introduced, the situation explained and the show’s location in both place and time is fully established.

It is the kind of exposition that is sometimes so weighty that it tends to sink the first episodes of many TV shows. Here, though, it all worked seamlessly.

The only disappointment to be experienced in the first episode of “The Alienist” is that it is only an hour. I didn't want it to end. And I cannot wait until Episode Two.

“The Alienist” premieres Monday (January 22) at 9 p.m. Eastern on TNT.