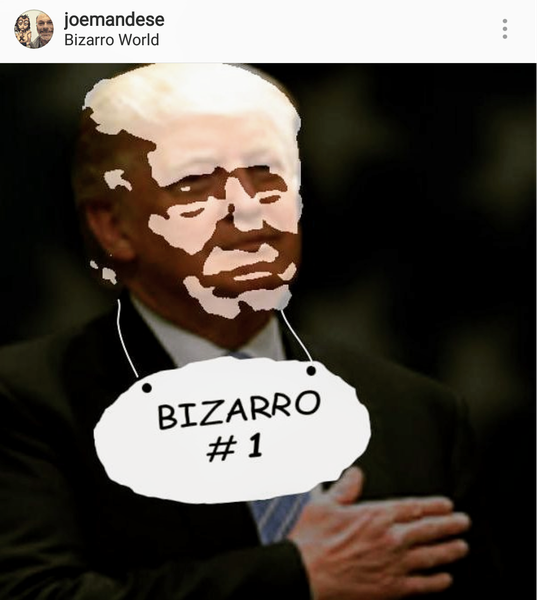 I was not a big social media user before November 8, 2016, but that all changed when Donald Trump was elected President. Partly because I wanted to understand the role social media -- especially Twitter -- played and continues to play in all things Trump, I jumped in. With both feet. I’ve learned a lot. Not all good.

But the first thing I ever posted about Trump was an image on Instagram of Trump as “Bizzaro #1,” a reference to the character in Superman who comes from Bizzaro World, where they say things that mean the opposite of what they mean on planet Earth.

Once you understand that he means the opposite of everything he says, it's pretty easy to understand him. The problem is, a significant portion of the population still take him literally, and believe him at face value.

According to an analysis published by The Washington Post, Trump officially made false or misleading claims more than 2,000 times during his first 355 days as president. I don't understand why anyone is surprised, or why some people still believe him at all. Especially on the occasions when there is physical evidence to prove otherwise.

Take the last 24-hour presidential news cycle, the one obsessing over Trump’s medical exam. In a one-hour press briefing Tuesday, the President’s doctor, Rear Admiral Ronny Jackson, gushed over how physically -- and mentally -- fit the President is based on his exam. The problem is that physical evidence, in the form of the President’s physical appearance, makes it hard to believe. Make that completely incredulous.

According to Admiral Jackson's report, Trump could lose some weight, exercise and have a better diet, but at 6’ 3” and 239 pounds, Trump has the same physical dimensions of some superfit professional athletes. Memes galore began popping up almost instantly on Twitter comparing photos of Trump to sports figures with the same height and body weight.

Check out Sports Illustrated’s round-up and you’ll get the idea.

The problem with little lies, like exaggerating the President’s physical fitness, is that it creates incredulity about other, arguably more important issues, like his mental fitness, which also got a clean bill of health from Admiral Jackson.

After posting another recent RTBlog about Trump, one reader commented that as Editor in Chief of MediaPost, I should find something more productive to do than troll the POTUS on Twitter. I explained that I do that mostly on my personal time, via my personal social media profiles. (You are welcome to follow me on Twitter @jmandese or Instagram @joemandese.) And, so it may seem, once every week or so on RTBlog.

Just to be clear, this is a blog in the literal sense: a web log of my thoughts and meanderings on a subject. The subject is my personal observations and reactions about how politicians use media, and how media use politicians.

So forgive me if I obsess about the media spectacle of Donald J. Trump. It’s all part of the story. Or as he would say, just some “Fake News.”