With Opioid Disposal, Walmart Takes Another Step Toward Wellness 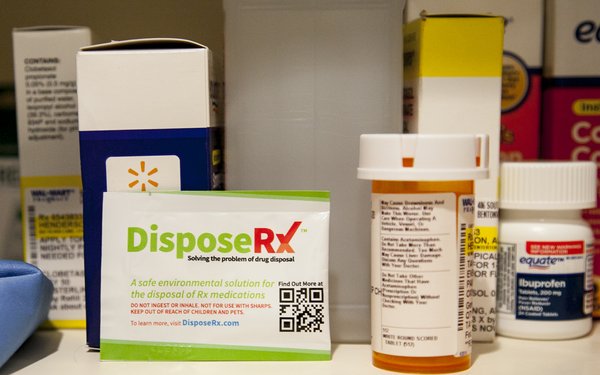 Walmart is taking another big step into healthy communities, and says it is offering a free package of DisposeRx, which safely dissolves unused medicine, with every opioid prescription.

It plans to distribute product at all of its 4,700 pharmacies nationwide, including Sam’s Clubs, and claims to be the first national pharmacy chain to offer a free opioid disposal solution. It based its decision on growing awareness of opioid addiction, and the role individuals play in fueling the crisis: About a third of opioid prescriptions go unused, and more than 65% of those who misuse the drugs get them from family and friends, according to federal sources.

Walmart’s move comes amid a more concerted push from all retail pharmacies to address the opioid problem, with solutions like making Naloxone, an opioid overdose drug, available over-the-counter in more than 40 states, for example, adding drug disposal kiosks in stores and organizing Drug Take Back Days.

But DisposeRx, based in Washington, D.C., is the first solution people can use at home. Consumers can pour the packet of powder into pill vials, along with warm water, which turns the leftover meds into a biodegradable gel.

“We know about 40% of households have expired medications, and about 25% have some type of opioid,” says William Simpson, president of DisposeRx. “Flushing drugs down the toilet or even throwing them away is bad for the environment. And leaving them in the home is dangerous.”

In purchasing the packets to distribute so widely, he tells Marketing Daily that Walmart is taking a big step toward consumer conversations about medication management. “Disposal completes the lifecycle. We hope that translates into better compliance, and then better health outcomes.”

Expanding into the health and wellness space represents a substantial business for all retailers, says Laura Kennedy, director of retail insights for Kantar Consulting, powered by big demographic changes. “But for Walmart, which is already the biggest and the one with the lowest prices, it represents an even bigger opportunity.”

“Walmart may have more than 4,000 stores, but they’re not building that many more, so it is really important to make the stores they have more relevant, more engaging, and to increase 'stickiness,’” she tells Marketing Daily, “whether that means giving auto centers a facelift or provide care clinics. The opioid piece is an important emblem in showing that it understands what’s happening in communities, and that it is very firmly focused on the health of the people it serves.”

The move also comes at a critical time, with the proposed CVS/Aetna merger poised to shake up retail pharmacy, and Amazon expected to jump into the prescription business any time now. (CNBC reports the e-commerce giant is currently recruiting for a HIPAA compliance lead.)

Still, she says, observers are anticipating that Walmart will soon make bigger moves into wellness. “I’m waiting to see how it will find new ways to personalize wellness offerings, even moving into the beauty space, finding more ways to integrate digital thinking.”

Walmart’s advantage over other brands, she says, “is that the perception about healthcare is that it is so expensive. With Walmart’s reputation for value and ability to drive prices, it really is a golden opportunity for them.”