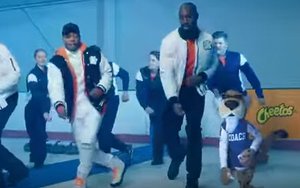 Back in October, Cheetos announced a new sports sponsorship that seemed a natural fit: the USA Curling team.

Now, the snack brand is simultaneously promoting its new limited-edition Winter White Cheddar Curls and building awareness and support for the team by inventing a new dance move, “The Curl.”

The PepsiCo Frito-Lay brand teamed singer/dancer Todrick Hall (who first gained fame on “American Idol”), San Francisco 49ers tight end Vernon Davis and NFL Hall of Famer LaDainian Tomlinson to devise the move and star in a promotional “Teach Me How to Curl” video (below).

The video is posted Hall’s social channels, as well as Cheetos’ website and social channels. It’s drawn nearly 660,000 views and about 104,000 views on Cheetos’s and Hall’s YouTube channels, respectively, since it was posted on Jan. 9.

The curling dance idea was inspired by football’s touchdown dance, according to Cheetos. The promotion — and the new flavor’s availability in stores (Feb. 12) — were timed to coincide with the USA Curling Club National Championships set for Feb. 10-17.