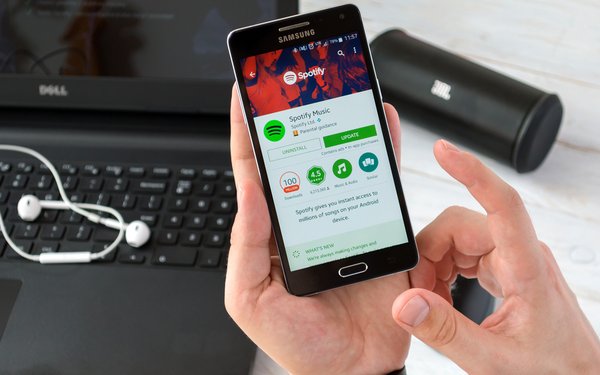 Paid music-streaming service Spotify is partnering with eight publishers to produce audio programming and visuals for a new format called Spotlight. The idea is to supplement the listening experience of audio shows like podcasts, audiobooks and news with photos, video and text.

The new programming can help Spotify tap into the $18 billion spent on radio advertising each year, Bloomberg reports, and boost revenue ahead of the company's IPO launch.

One of the first Spotlight shows will be a short (under 10 minutes) daily newscast featuring reporting from BuzzFeed journalists. The show will be audio-first, but include infographics and other visual elements.

“These are news updates for people of the generation we serve, 18-to-35-year-olds,” Ben Smith, editor-in-chief of BuzzFeed, told Bloomberg.

Spotlight will also feature content from some of its own original series, such as 'RISE,' 'Secret Genius,' 'Spotify Singles' and the new 'Viva Latino' podcast.

The Spotlight format “merges great storytelling, news, information and opinion with visual elements all delivered in playlist form across a number of content categories,” stated Courtney William Holt, head of studios and video at Spotify. “Playlists play an important role in the daily lives of our users bringing them closer to the creators they love.”

The Spotlight series will span across news, politics, sports and pop culture topics.

Smith added: “It feels like a generation ago that MTV News delivered the latest to a whole generation of music fans, but it’s not hard to imagine BuzzFeed News and Spotify doing the same in 2018.”

The programs that will be versions of podcasts already available on Spotify —- like Crooked Media’s “Pod Save America” — will initially contain the same ads, according to Bloomberg, while other programs won’t have ads during the initial testing phase.

At launch, Spotlight will only be available to U.S. listeners. New series will be released throughout February and the company plans to expand Spotlight to additional markets “in the near future.”

The initiative is an effort to compete with services like Apple Music, which also provides music and podcasts to users.

Despite its popularity with over 70 million users, Spotify is not yet profitable, due to the high cost of music rights, per Bloomberg.