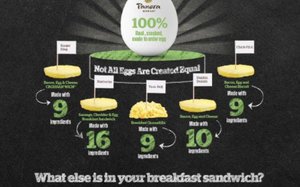 Panera Bread is once again demonstrating its genius for earning free media exposure for new offerings through well-publicized initiatives relating to its “100% clean” brand promise.

This time, Panera has announced that it has petitioned the Food and Drug Administration to establish a clear definition of “egg.” And it’s making no bones about timing this move to coincide with its launch of a line of made-to-order breakfast sandwiches “featuring 100% real eggs.”

The restaurant brand points out that lack of a more specific FDA definition of egg has allowed food purveyors to use eggs that include additives such as butter flavors, gums and added color and sell them under the generic term “egg.” Panera says that its research found that half of the top 10 fast casual restaurants that sell breakfast have an “egg” made of five or more ingredients.

Panera says its goal in petitioning the FDA is to “better support and inform guests in the absence of a true definition for the word ‘egg.’”

Of course, it also provides an opportunity to get the word out through the press that Panera uses only “freshly prepared, cracked shell eggs and/or egg whites with no additives” in its new sandwiches and other egg-containing menu items.

The brand’s press release includes statements from several of its executives, such as president and CEO Blaine Hurst, who stresses that, “Responsible companies will be transparent about the food items they serve, even if regulation does not require them to do so.”

Panera has a growing track record for pairing press-generating initiatives tied to clean food and transparency issues with its product launches.

Last March, the company grabbed headlines and generated awareness for its new line of craft beverages by becoming the first national chain to post added sugar information, as well as calories, for all self-serve beverages in its restaurants.

In September, when it announced that it would offer kid-sized portions of all items on its regular, free-of-all-additives menu instead of separate kids meals, Panera used a somewhat different publicity tack. Founder and then-CEO (now executive chairman) Ron Shaich used a video posted on the brand’s Twitter channel and an open letter published in national newspapers to challenge the CEOs of leading fast-food chains to eat off of their kids menus for a week — and then reevaluate the meals’s nutritional value.

The breakfast sandwiches launch is also being promoted through a social media push encouraging consumers to “join the conversation around egg transparency on social media by using #RespectTheEgg. Panera employed the same theme for a press event in New York City featuring sampling of the new sandwiches and information about their ingredients versus those used by competitors.