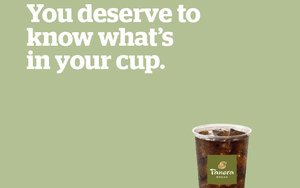 Panera Bread is driving awareness of its new line of craft beverages, and its “clean” brand promise, by becoming the first national chain to post added sugar information, as well as calories, for all self-serve beverages in its restaurants.

Following its recent announcement that it has achieved its goal of having a 100% “clean” food menu, the chain is now debuting artificial ingredients-free teas, lemonades and frescas with zero to moderate levels of added sugar content.

By prominently posting added sugar content and calorie information on the self-serve spouts of all beverages for comparison purposes, and publicizing that move, Panera aims to underscore its clean brand promise, transparency and championing of consumer “options,” while also promoting its new beverages’ healthier profiles versus high-sugar-content sodas.

The drinks launch campaign is part of Panera’s ramped-up 2017 marketing — with a budget of about $100 million — to tout its 100%-clean message.

The centerpiece of this spoke of the umbrella campaign is a full-page ad, from Panera AOR Anomoly, that is running in The Washington Post today. The ad (top half shown above), takes a more aggressive approach than Panera’s previous creative, with a headline declaring “You deserve to know what’s in your cup,” and a subhead promising “real information” and “real options.”

The head draws attention to an open letter below, from Ron Shaich, Panera’s founder, chairman and CEO, stating that “something needs to change,” and announcing Panera’s new sugar-content posting policy...and new drinks.

“Our goal is not to dictate what you drink, it’s to be transparent and provide you with the information you need to make informed decisions,” reads Shaich’s message, in part. “And we challenge the beverage and restaurant industries to join us in this effort. Whether you choose soda or lemonade, you deserve to know what’s in your cup and how it affects your health.”

“We want the rest of the restaurant industry, and the beverage industry, to follow our lead in providing information transparency along with clean food and beverage options,” Panera head of marketing Chris Hollander summed up to Marketing Daily.

On that point, there appears to be something of a war of claims developing. This week, rival Chipotle Mexican Grill issued a release asserting that it is now “the only national chain to use no added colors, flavors or preservatives” in any of its food ingredients, “except for lemon and lime juices which can be used as preservatives, though Chipotle uses them only for taste.”

In response, Panera director of wellness and food policy Sara Burnett reiterated to Marketing Daily that Panera’s food contains no artificial additives, adding that the chain uses natural preservatives like rosemary extract in select products, for safety and quality reasons. “We began this [additives removal] journey over three years ago, and have been inspired by the number of brands following,” she stated. “We respect and appreciate Chipotle joining us to better serve guests.”

Panera’s new drinks include two unsweetened teas; a fresca that's lightly sweetened with fruit juice (0 grams added sugar); and two teas and one lemonade variety that contain under 35 grams of added sugar per 20-ounce cup. That compares to the 65 to 75 grams of sugar in 20 ounces of many regular sodas.

The non-carbonated drinks are set to roll out in company-owned Panera cafés between April 5 and July, and in all franchisee-owned locations by September. The chain has about 2,000 locations in the U.S. and Ontario, Canada, about half of which are company-owned.

Back in 2010, Panera voluntarily became the first national chain to post calorie counts for all of its menu items (following New York City’s 2008 implementation of mandatory calorie posting for chain restaurants). Since then, several other restaurant brands, including Dunkin’ Donuts, McDonald’s and Subway, have followed suit. And after years of delay, the FDA rule requiring that calories are listed on menus and menu boards at all chains with 20 or more locations is now supposed to go into effect on May 5. But the new rule, which is part of the Affordable Care Act, doesn't require that restaurants post added sugar information.

The FDA’s new Nutrition Facts label includes added sugar breakouts (grams and percentage of daily value per serving) for the first time. The new label will be required to be in place by July 26, 2018, for all food and beverage makers except those with less than $10 million in annual sales, who are being given an extra year to comply.