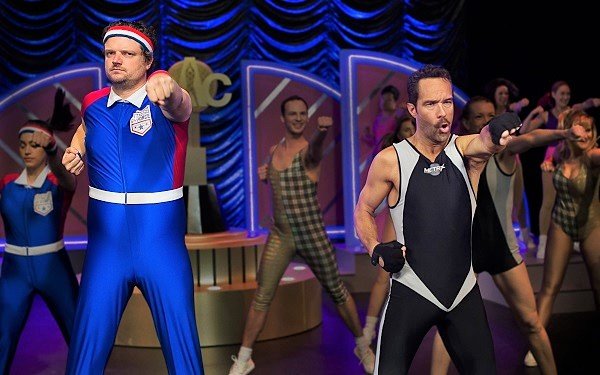 Here is some advice for any TV network in the throes of planning the date and time for a new show's debut.

If your show is anything like this new comedy about dueling fitness facilities premiering on the Pop network on Wednesday, then you should try to make sure it is premiering during a week when there are so many other premieres scheduled that TV critics won't get around to watching yours.

Of course, this all presumes that TV critics as we once knew and regarded them still have any clout where the influencing of public opinion is concerned. Still, for all involved -- TV critics, networks and viewers alike -- it is best if a show such as this one, titled “Let's Get Physical,” comes to the air largely unnoticed. Perhaps it might soon leave in much the same way.

Speaking for myself, I could have done without assigning myself the task of watching this show in advance of its premiere this week (Wednesday night at 8:30 Eastern on Pop). But a glance at an online listing of this week's TV premieres revealed that there were very few other new shows to write about this week, so here we are.

The new comedy that I subjected myself to, in the hopes that readers of this TV Blog might be spared the same experience, is centered on a flabby 20- (or possibly 30-) something guy who is estranged from his stern father, an ex-military man turned-personal trainer who ran a local gym called Fitness By Force.

One day, the father dies and his wayward son inherits the gym with various strings attached. They are too complicated to describe here, but they have to do with the son's lifelong rivalry with a former classmate who grew up to become a local fitness personality whose gym competes with his dad's. Matt Jones (above photo, left) plays the out-of-shape schlubby guy and Chris Diamantopoulos (photo, right) plays his buff rival.

The premiere episode of “Let's Get Physical” showed glimmers of hope. Matt Jones is great as the pudgy lead character, Joe Force, who leads a local rock band with the ridiculous name of Guns Van Jovi. And the show's satire of today's gadget-crazed, high-tech gyms is right on the money.

But like so much else that tries to pass itself off as comedy these days on TV, this show resorts to subjects that are decidedly tasteless. Or they used to be. As I have noted many times here, tastelessness in TV comedy seems to be widely accepted these days, for which I blame younger people. (Note: This view is the author's own, and does not reflect the viewpoint of editors or management here.)

Readers of these TV Blogs can guess what I am talking about here. In the premiere episode of “Let's Get Physical,” the first joke about penis size arrives at about 16-and-a-half minutes into the show. I know what you're thinking: That's kind of late for a new sitcom these days.

This is where a TV columnist brought up in more tasteful times finds it impossible to describe a scene like this -- what she did, why she did it and what the “joke” is supposed to be (this last being just a straight-up mystery to me). Speaking of mysteries: What has gotten into Jane Seymour?

This scene, which took place some time in the episode's first minutes, had one silver lining, though -- it allowed me to rationalize bailing on Episode Two of “Let's Get Physical” without having to sit through any more of it.