Are CEOs The Next Public Servants?

The bell has rung on year one of Donald Trump’s exhausting and culturally tempestuous presidency. His provocative executive orders and tweets have spawned immense activism by students, women, athletes, scientists, and actors — railing against Trump’s bigotry and Gilded Age policies. And for the first time in recent history, corporations and their CEOs have actively entered the political fray.

Until recently, companies have signaled their socially conscious and political leanings more subtly, through corporate social responsibility (CSR) programs dictating business practices and cause marketing campaigns aligning their brands with social causes. Most companies have avoided weighing in on politically divisive issues for fear of alienating consumers and shareholders or thwarting lobbying efforts on the Hill.

Trump has turned that tide. CEOs are speaking out fervently on polarizing social and political issues, compelled by moral outrage at the president’s actions and  the recognition that party politics have trumped principled leadership in Washington. If the past year is any measure, many CEOs are feeling a call to public service or a sense of responsibility to fill the growing void in moral leadership in this country, publicly entering the POTUS-induced melee on some significant issues.

From the get-go, corporations stood against Trump’s ban on immigration from seven Muslim-majority countries. Hundreds of top leaders includingGoogle, Apple, Microsoft, Facebook, and Netflixpublicly opposed the banas discriminatory, and donated to civil liberties organizations. When Trump vowed to rescind DACA  — which allows the undocumented children of immigrants to stay in the U.S. — Facebook, Salesforce, and IBM spoke out for the Dreamers’s continued protection. Amazon’s Jeff Bezos recently donated $33 million to a Dreamers’ scholarship fund.

Then Trump trained his chaos inward, stoking deep-seated racial discord within the United States. Instead of denouncing the racism and violence of the white supremacist rally in Charlottesville, Va., that left three people dead, Trump placed blame for the conflict on "both sides." This unleashed a tsunami of CEO rebukes — from Merck and GE to Under Armour and Walmart — and wholesale resignations from Trump’s Strategic and Policy Forum.

It’s no secret Trump considers climate change a “Chinese hoax,” despite a 97% scientific consensus. While advancing coal and oil exploration interests, he’s yanked climate change research and references from .gov websites. When Trump pulled the U.S. out of the global Paris Agreement on Climate Change, CEOs from Tesla, Disney, Goldman Sachs and most tech companies denounced the move as an abrogation of the U.S.’s global moral responsibility. GE’s, Jeff Immelt laid down the gauntlet: “…Climate change is real. Industry must now lead and not depend on government.”

In response to the administration’s chipping away at protections to our public lands, Patagonia sued Donald Trump and ran a TV ad to fire up people to save the National Monuments. The government responded: 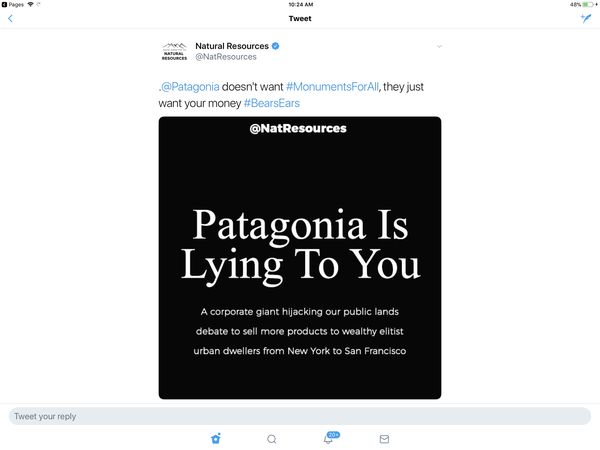 As risky as corporate resistance may be, consumers want it.In a new Social Sprout study, 66% of consumers say it’s important for brands to take public stands on social and political issues.

So CEOs and their companies will continue to exercise their moral authority. When CEOs give voice publicly, they won’t be one-offs, but rather holistic embodiments of their corporate core principles and brand DNA. As a result, CEOs will be more involved in positioning, and companies’s public affairs, messaging, and brand management functions will be vital.

Corporate America will have plenty of opportunities to engage because net neutrality, race relations, fossil fuel exploration, and entitlements promise to rage on in Trump’s year two. The big question: will CEOs and companies limit their participation to reacting to Trump’s missteps or will they go the way of Ben & Jerry’s and proactively lead the charge on critical issues?

7 comments about "Are CEOs The Next Public Servants?".
Check to receive email when comments are posted.
Read more comments >
Next story loading