The State Of The Ad Industry Under Trump: Not-So-Sanguine 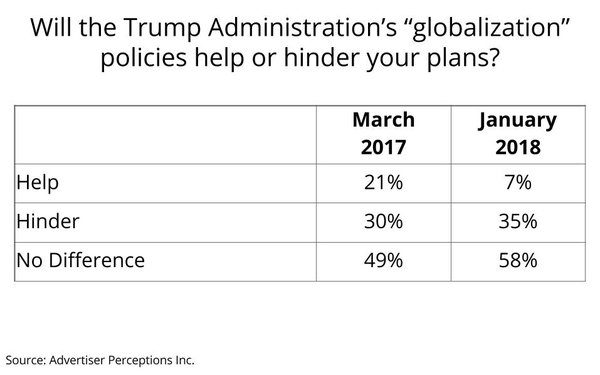 The state of the union under Donald J. Trump may be debatable, depending on your political perspective, but the state of the ad industry under Trump’s presidency is clearly a net negative, according to some interesting tracking data Advertiser Perceptions Inc. has been collecting from ad executives over the past year.

Asked whether the Trump Administration’s attitudes and practices toward “globalization” have been helping or hindering the plans of ad executives to market or advertise globally, the trend has been in the negative direction.

When AP first asked ad executives in March 2017, more than one-fifth (21%) saw Trump’s actions as being a net positive for global marketing. A year later, only 7% felt that way.

Conversely, the percentage of ad execs who perceive Trump’s policies as hurting their plans has increased to 35% from 30% over the past 10 months.

Overall, the majority of ad executives feel Trump has had no impact on their plans.

According to AP’s analysts, the concerns over Trump’s globalization policies is most acute among consumer electronics and entertainment advertisers.