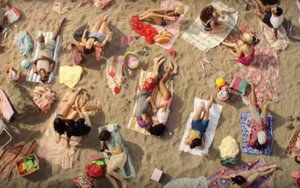 At a time of severe divisiveness in the U.S., Coca-Cola will offer Super Bowl watchers an upbeat ad celebrating diversity and inclusion.

Coca-Cola has pre-released the 60-second spot (below), set to run in the game’s fourth quarter.

Titled “The Wonder of Us,” the ad, created by Wieden + Kennedy Portland and directed by Alma Har’el, is the first in a series of TV ads under a new brand platform, “A Coke for Everyone.”

The ad consists of brief vignettes of all types of different people enjoying many different activities, accompanied by different voices (female and male adults, children) reading an original poem written by one of the agency’s team members.

The words: “There’s a Coke for he, and she, and her, and me, and them. There’s a different Coke for all of us –– especially one for him. No feet have wandered where you’ve walked. No eyes saw what you’ve seen. No one’s lived the life you live. No head has held your dreams. To act the same would be mundane —  what a boring thing to do! That’s why there is just one me,  and a billion unique yous. We all have different looks and loves, likes and dislikes, too. But there’s a Coke for we and us, and there’s a Coke for you.”

“We want people to stop for a moment and think about the Coca-Cola brand in a fresh and modern way,” Jennifer Healan, group director, integrated marketing content, Coca-Cola North America summed up in the Coca-Cola Journey blog. “’The Wonder of Us’ celebrates the things that make us different and reminds everyone that although we are all unique, there’s a perfect Coke for you.”

The tone is reminiscent of Coke’s classic 1971 “Hilltop” ad, but the creative team chose to use a poem instead of a song or dialogue to make the ad more surprising and memorable, Healan said.

Integrated into the optimistic messaging, of course, are shots of folks consuming Coke, Coca-Cola Zero Sugar and Coca-Cola Life in various sizes of cans and bottles. The ad serves to remind consumers that "there's a different, delicious Coke — glass bottle or mini can; zero sugar or original taste — for every occasion and every unique individual,” said Stuart Kronauge, senior vice president of marketing and president of USA Operations, Coca-Cola North America.

Support for the ad will include a full-page ads featuring the full text of the poem: one in Sunday’s The New York Times and another in Monday’s USA Today.

The new Super Bowl ad —which marks Coca-Cola’s 12th consecutive Super Bowl appearance — will  kick off a new platform, “A Coke for Everyone,” with TV ads and other digital, social and experiential marketing throughout the year tied to key events and seasons, including the Olympics.

Other new ads will include “Mural,” an “animation/live action mashup that takes a more playful approach to the ‘A Coke for Everyone’ message, and ‘Tailgating,’ which romances the connection between Coca-Cola and food associated with spectator sports like NASCAR, college basketball and college football,” the brand revealed online.

“Coke for Everyone” is in turn part of the Global One brand strategy that the Coca-Cola Company launched in 2016 to implement a unified brand approach to Coca-Cola, Coca-Cola Zero Sugar and Coca-Cola Life.