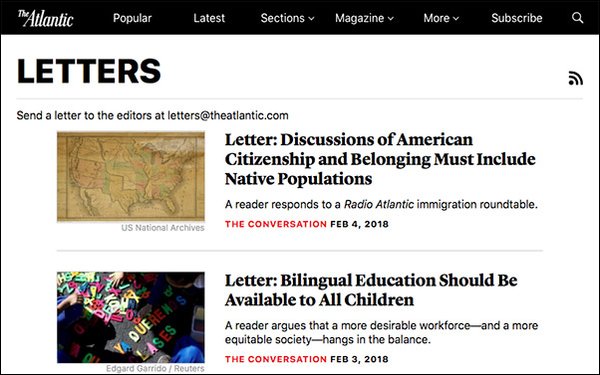 The Atlantic no longer has a comments section.

As of last week, TheAtlantic.com replaced its comments feature with a section dedicated to reader feedback, called "Letters." The new section is inspired by "The Conversation" section of The Atlantic's print magazine, according to Nieman Lab.

A team made up of print and digital staffers will review letters submitted by The Atlantic’s readers and curate the “smartest, most compelling responses to our journalism,” Jeffrey Goldberg, editor in chief of The Atlantic, wrote in a post on the site.

"Letters" will get the same look as TheAtlantic.com’s articles, placed on the site’s homepage and social channels. So far, "Letters" range from a reader criticizing TheAtlantic.com’s editor for describing Tom Brady as “the absolute worst,” to a reader advocating for bilingual education for all children.

The new section is an effort is twofold — to highlight intelligent feedback from The Atlantic’s readers, while discarding the comments sections, which can spark debate but also spiral into offensive language.

“Over the years, robust conversation in The Atlantic comments section has too often been hijacked by people who traffic in snark, ad hominem attacks, even racism, misogyny, homophobia and anti-Muslim and anti-Jewish invective,” Goldberg wrote. “Instead of hosting these sorts of unhelpful, even destructive, conversations on TheAtlantic.com, we are choosing now to elevate respectful, intelligent discourse and argument.

"We want smart and critical readers to have a more visible role on our site, and we’re looking forward to hearing from you, and publishing you," he added.

The Atlantic joins a number of media companies that have abandoned comments sections.

In November, Crain’s Chicago Business closed down the feature on its site, following a similar move by Al Jazeera English in September, and sites like The Daily Beast, Mic, Reuters, Chicago Sun-Times and NPR.

But The New York Times has chosen to go the opposite route. It announced last summer it would open up 80% of its articles to comments —= up from 10% — using Perspective, an application created by Alphabet’s Jigsaw service.