10 Years After The Great Recession, Is Luxury Finally Coming Out Of Its Shell?

It has now been 10 (!) years since the financial crisis that triggered the Great Recession. And while some economic indicators (such as median income and auto sales) have finally surpassed pre-recession levels, some qualitative indicators suggest many consumers are still feeling the emotional hangover. Case in point: luxury’s “public persona.”

The financial crisis of 2008 brought on an almost unprecedented pause in the luxury market. It was particularly jarring because it stood in marked contrast to the “aspirational luxury shopping” that drove the luxury boom of 2005-07 — traditional luxury buyers were joined by mass affluent and upper-middle-class consumers. Riding the housing market, it felt like everyone was going to be rich, and consumers spent based on anticipated, rather than actual, wealth.

Luxury paused, and then slowly recovered in stealth mode. Stories (perhaps apocryphal) circulated about women walking out of Bergdorf-Goodman with their purchases in brown paper bags. Luxury brands retooled with more subtle and understated designs. What Coco Chanel had said about luxury many years before seemed more true than ever — “luxury lies, not in richness and ornateness, but in the absence of vulgarity.” Luxury as status symbol seemed terribly out of step, and the trend (continuing today) of spending on experiences rather than things got its start.

And so it remained for much of the last decade. Luxury remained subdued. Value became a key part of the luxury purchase equation. And Apple, arguably emerging as the most influential luxury brand in the world, took luxury sensibilities in new directions as well: sleek, minimalist and functional.

Until, apparently, now. Luxury’s public persona is back with a new boldness, and a few tweaks to enhance Millennial appeal. Consider Gucci’s recent success. For a brand that’s approaching its 100th birthday (founded in 1921), Gucci’s recent innovations have taken risky but ultimately successful steps with the brand. Led by new creative director Alessandro Michele, Gucci has gone in a bold new direction that some have called “maximalism” or “the new Gucci” — focused on standing out rather than flying under the radar, the new Gucci mixes eras and styles and colors in a fashion more inspired by glam rock than classical music (doesn’t hurt that Elton John is a fan). 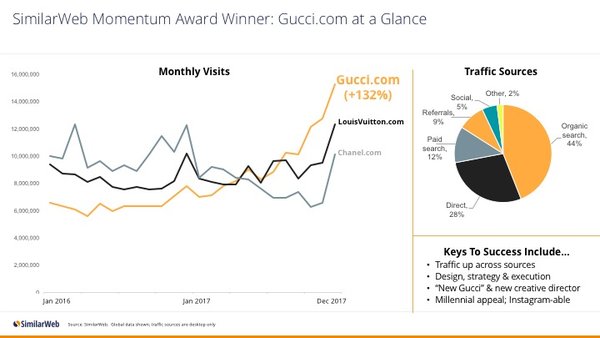 Gucci’s year-over-year sales in Q2 and Q3 of 2017 were up more than 40%. Particularly remarkable is Gucci’s digital success, which even won it one of our Momentum Awards for brands thriving in the digital space. Visits to Gucci.com are up 132% over the past two years, with growth accelerating as 2017 came to a close. Yes, the holiday season of 2017 provided a bump for many luxury brands, but Gucci’s digital success far outpaces competitors such as Louis Vuitton and Chanel.

Most of Gucci’s website traffic comes directly (reflecting a strong brand) and from organic search (strong SEO performance), but it is growing across every channel, highlighting strong performance throughout its business — design, strategy, and execution. Its 12% of traffic from paid search is very high compared to brands in other categories, but is about par for the course among luxury brands, which often get 10-15% of their traffic from paid search (much of it from buying their own brand name). But the rising tide of its traffic across channels has made Gucci less dependent on paid search.

The biggest challenge that traditional luxury brands have today is evolving to be relevant to today’s consumers, while staying true to the heritage and values that made them great. Burberry pulled it off a few years back, but the staid plaid was an easier sell when people still sought subdued luxury. Today’s Gucci’s boldness avoids stuffiness, and is more accessible than exclusive. It’s working — more than half of its sales now coming from Millennials, and our data find that Gucci’s web traffic skews younger than competitors’s.

Gucci’s recent success certainly reflects its hitting on all cylinders as a business. But it also reflects a broader shift in luxury markets and consumer mindsets; 10 years after the financial crisis drove luxury in an understated direction, the pendulum is beginning to swing back.