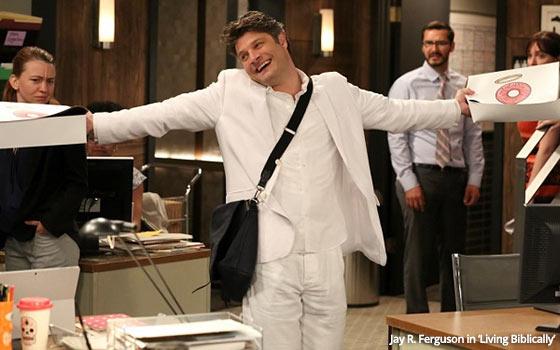 In my long career as a writer of opinion columns about TV, I have learned that sometimes headlines write themselves.

And at other times, the headlines you hope to fulfill do not come true, so you accept these lost opportunities and move on to other ways of entertaining yourself (and also readers).

Take this new CBS sitcom called “Living Biblically,” which premieres on Monday. As I prepared to watch a couple of episodes this week, I found myself hoping that this series about a guy who decides to live his life strictly according to the Bible would turn out so badly that I could start out the headline on this TV Blog with the words “Holy Crap!”

Alas, it was not meant to be. While this sitcom is not exactly a four-star masterpiece (far from it), it does not deserve to be labeled as “crap” -- holy or otherwise.

It is, at the very least, well-meaning. Basically, this 30-something man -- who works as a movie critic at a newspaper in New York (although the office he works in hardly looks like a newspaper newsroom) -- decides to begin living his life according to the Bible after the death of a close friend.

This man's vow is a contrivance, of course, and would seem to constrict a sitcom like this into covering the same topic week after week. The show had me wondering how on earth they will sustain this one-topic comedy through multiple episodes and even seasons (should the show get that far).

Already, in a second episode CBS provided for preview, a conversation occurs at the outset in which this man (played by Jay R. Ferguson, seen in the photo above) and his wife (Lindsay Kraft) have a lengthy conversation comparing Jesus to Beyoncé.

This discussion went on for so long that it felt like padding that had been inserted into the start of the show so that the episode could make its required running time. The conversation’s subject matter was idiotic, and it felt forced.

But have faith. This show is based on a book by A.J. Jacobs called “The Year of Living Biblically: One Man's Humble Quest to Follow the Bible as Literally as Possible.” Credit CBS and the makers of this sitcom for having the wisdom to greatly shorten this windy title.

The author supposedly lived for a year according to the Bible. In the TV show, the main character -- named Chip -- is supposedly doing the same thing. He is so serious about this new lifestyle that he enlists the help of a rabbi and a priest, and he often meets them in a bar (this is not the setup for a joke).

Among other things that happen to Chip: He realizes his smartphone is really a “false idol” that he should not worship. So he destroys it and lives for a time in the way all of us used to live before cell phones and social media took over our lives.

The good news is that Chip's newfound devotion to the Bible and its teachings reaps dividends for him almost immediately, as good fortune suddenly starts to find him. Some people call this luck; others who are perhaps more enlightened call it faith.

Speaking of miracles, in the two episodes I previewed -- the Monday premiere and a subsequent episode -- the words “penis” and “vagina” were never uttered, which must represent some sort of historic first for a new CBS comedy.

I wish the same could be said for bodily functions that seem to obsess network sitcom writers these days. In the premiere, a joke in two parts concerning Chip pooping in his pants at a Rite Aid (yes, a Rite Aid) comes at about eight minutes into the episode. In the other episode, also about eight minutes in, came the show’s first joke about peeing.

Aspects of the show are genuinely funny, such as when the priest tells Chip the church is always open. “We're like Heaven Eleven,” the priest says.

Oh, well, maybe it wasn't as funny in print as it was when it was uttered on the show. In any case, this show's ubiquitous (and overused) laugh track seemed to really love it.