In NBC Show, Women Take Up Arms To Feel Empowered 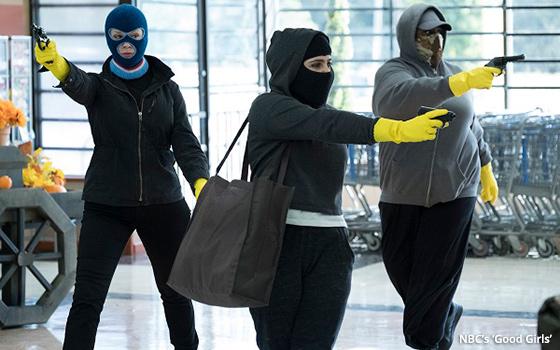 The empowerment of women has come to this.

In the new NBC show called “Good Girls,” the “girls” are actually grown women. And they are not good.

Instead, they are bad girls (or bad women) who have turned to crime in order to fix what is wrong with their lives. Their lives’ deficiency can be boiled down to one issue: Money problems. So, like criminals everywhere with the same problem, they conspire to stick up a supermarket.

The three -- seen brandishing guns, wearing masks and scaring law-abiding store patrons to death in the photo above -- each have different problems that have led to their money shortages.

At least one of them has been done wrong by her husband. She is the character played by Christina Hendricks, who became a star on “Mad Men” as the office manager Joan Holloway.

Her husband is a used-car dealer who has been having a steamy affair with the amateur “model” he hired to appear with him in his cheesy TV commercials. This show's point of view is: He is a man. So what else would you expect him to do?

By contrast, one of the other women is in a very secure marriage. She is the one played by the actress known as Retta. This actress, seen previously in “Parks and Recreation,” goes by this one name only, like Cher or Madonna.

Her marriage is strong, but her salary and her husband's cannot cover the cost of some expensive medicine for their seriously ill daughter.

So for this reason, the character played by Retta takes up arms with her friends and holds up this supermarket. It was not possible to discern whether the pistol she carried was a Ba-Retta, however.

The third gangsta woman in this show is a young single mom with a teenage child who is technically a daughter but whose gender identification is challenging to define -- not that there's anything wrong with that, etc. etc. She seems like a nice kid, and common to scenarios on TV such as this one, the child is more mature than the mother.

The mother is played by Mae Whitman. Her money issues seem to stem from her low-paying job as a cashier at a supermarket. This is the very supermarket the three decide to hold up.

OK? Got the picture now? Whether or not this information was helpful or new to you depends on whether or not you have been watching NBC over the last two or three months or so. In that time, “Good Girls” may have set some sort of network television record for the number of on-air minutes NBC has devoted to promoting it.

The guess from here is that NBC saw an opportunity to gain some traction for this show and its “Thelma and Louise Plus One” scenario because of this current era we are in.

It is, of course, the age of female empowerment stemming from all of the sexual harassment and abuse stories involving men in power that have been making headlines for two years or more.

But when I watched the premiere episode (airing Monday night on NBC), I had the uneasy feeling that the life of crime these women were taking up was inexcusable, even if the show tries very hard to position their resort to robbery as acceptable given their circumstances.

It didn't play that way when they stormed the supermarket and pointed guns at innocent people and threatened them with harm or death.

The problem is that we are in another era at the present time -- and that happens to be an era of gun violence.

So when the women in this TV show threaten the lives of people who are shopping in the supermarket, it does not play as if these three women are refreshingly empowered. Instead, they are just criminals.

You half expect one of their guns to go off by accident and wound or even kill someone, and then the show playing it as light comedy.

“Good Girls” is not a good show. Its central premise simply doesn't work. Women or men should not strive to solve their financial problems by sticking up grocery stores.

And in this day and age, with all of the headlines and news stories we see every day about people with guns invading spaces where the rest of us are vulnerable and unarmed, this show about aggrieved women committing armed robbery just won't wash.