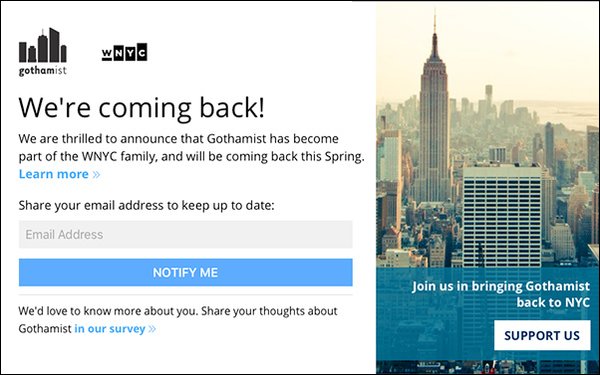 When Gothamist and its satellite sites were shuttered last fall, an important source for local news was lost and its impact felt almost immediately.

In a surprise twist, Wired reported on Friday that the beloved site, along with LAist and DCistwould be resurrected by local radio affiliates, thanks in large part to two private donations.

After billionaire Joe Ricketts purchased the media company and incorporated it into his own local news network, DNAinfo — which will have its archives preserved as part of the deal — he shuttered both Gothamist and DNAInfo a week after employees voted to unionize, calling the business unsustainable in a letter on Gothamist’s homepage.

After closing Gothamist, founders Jake Dobkin and Jen Chung began the search for someone to take on the site.

The move rightly made supporters of local news worry about its future, and the vulnerability of sites like Gothamist in an unstable media landscape. But Friday’s announcement revealed the power and popularity of local news, and its ability to sustain some of those voices.

Three public radio stations, WNYC in New York, WAMU in Washington, D.C. and KPCC in Los Angeles, will each bring back the site connected to their respective cities. A search is on for local radio stations and news outlets that might be able to take on Gothamist’s Chicago and San Francisco arms.

Gothamist’s death and revival touch upon two common media stories in the digital age: the precarious future of local news, at a time when local newspapers are being swallowed by news conglomerates, and the uncertain future of a website’s archives following a sudden and devastating closure.

After Ricketts closed the site, he blocked access to the site’s archives, angering the pubic and the writers whose work he’d made unavailable. However, following push back from the public, Ricketts restored the sites, making their content available once again.

Gawker, however, continues to face a similarly uncertain future.

After the 2016 lawsuit in which the media company was forced to file for bankruptcy following a lawsuit by former pro wrestler Hulk Hogan, its archives remain in limbo. Affiliate sites like Jezebel and Gizmodo were sold off to Univision, but the Gawker name was considered too inflammatory to keep.

A few enemies of the site have placed bids to acquire the Gawker.com name and archives, including Peter Thiel, who funded the lawsuit, and Mike Cernovich. Should one of them or any other wealthy bidder with a vendetta acquire the site, its archives could be deleted from existence.

Fortunately, Gothamist and DNAInfo have been spared that fate. Gothamist will begin publishing new content in the spring, though details are still being ironed out regarding staffing and frequency.