Oscar Post-Mortem: Oldest Star In the Room Outshone Everyone 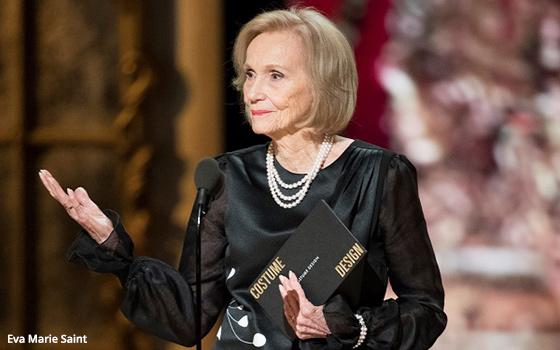 The Oscar for Most Classy goes to Eva Marie Saint, who outshone everyone else at the Academy Awards Sunday night.

While other segments of the choppy, meandering, overlong telecast on ABC were comedic or at least entertaining, still other portions were torturous to watch.

The show was heavy on speech-making about equality, diversity and inclusion -- so much so that you could be forgiven for becoming sick of it, even if the messages of support for sexual-harassment whistleblowers and immigrant dreamers were well-meaning.

Two segments stood out as the absolute worst of these. One was the appearance on-stage together of Ashley Judd, Annabelle Sciorra and Salma Hayek to introduce a pre-produced video segment about the MeToo and TimesUp movements.

I wrote in my notes that this was the “most boring part of the whole show” -- a real showstopper, but not in a good way. At one point, Judd seemed to invent a new word -- “intersectionality.” Oh, well, if this word is not entirely new, then it was new to me.

The other of the two worst segments in the Oscars was the pair of Tiffany Haddish and Maya Rudolph, who collaborated on a racist rant about the white people they saw backstage.

The bit was atrocious. Naturally, it was praised by countless clueless observers on social media along with so-called journalists who would never dare react skeptically to a bit such as this one.

The two were applauded enthusiastically by the Oscar attendees inside the Dolby Theatre too, lest anyone be seen on TV with an expression that suggested he or she objected to being insulted.

Saint -- who won a Best Supporting Actress Oscar in 1955 for “On the Waterfront” -- appeared much earlier in the show to present the Oscar for Best Costume Design to “Phantom Thread.”

When she observed that she was older than the Oscars themselves, thousands of disbelieving viewers headed to the Internet to learn her age.

They learned that she is 93, although you could be forgiven for wondering if the Internet had made a mistake because she seemed much younger.

She was the most glamorous presence at the Oscars this year, and when she mentioned her late husband of 65 years and how she missed him, there was not a dry eye in the house (at least our house).

The Oscars were 90 years-old this year, and the telecast on ABC took advantage of this milestone to salute the history of Hollywood. These were some of the best-produced segments in the whole show.

Among other things, montages of past winners in various categories were shown before the announcements of this year's winners. And at some point midway into the telecast, a lengthy montage of clips covering the whole history of (mostly) American moviemaking was a pleasure to watch.

In this context, the show's “In Memoriam” segment was an epic fail -- even more so than usual. Not only were myriad stars and personalities omitted, but the segment itself was so poorly produced that it seemed downright neglectful. It was almost as if someone had forgotten to produce it until a week ago and then threw it together at the last minute.

It consisted almost entirely of maudlin, static headshots of the deceased, with almost no actual film or audio to accompany them. Compare this to the elegant way Turner Classic Movies puts together still photos and movie clips in its own annual, year-end tributes to deceased luminaries -- “TCM Remembers” -- and the Oscars' neglect of this important segment is inexcusable.

Bringing back Faye Dunaway and Warren Beatty to present the Best Picture Oscar and, in the process, make up for last year's Best Picture snafu was a creative touch.

So was the opening segment in which host Jimmy Kimmel narrated black-and-white footage of old and new Oscar shows in the manner of an old newsreel announcer.

Kimmel was neither bad nor good, but somewhere in-between. Call him inconsequential. His appearance as host of his second consecutive Oscars illustrated why it is best to have different people do it every year.

Picking the right person is not always easy, however. Already there are breathless social-media rumblings about having Tiffany Haddish and Maya Rudolph co-host next year's show.

This is the way the world is going, I suppose, farther and farther away from the class, restraint and elegance represented by the likes of Eva Marie Saint.

In her remarks, Saint mentioned her own personal favorite article of clothing she wore in the movies -- a black dress printed with red roses in “North by Northwest.” And suddenly, thousands searched again for Eva Marie Saint, this time in Google Images for a look at that classic dress, and a fleeting glimpse at the glamor that was Hollywood.