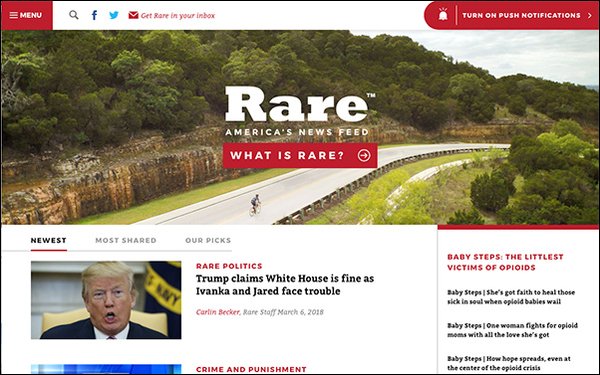 Conservative site Rare.us is shutting down at the end of this month.

“As some of you have already heard, Cox Media Group, our parent company, will be discontinuing Rare at the end of this month,” Rare’s politics editor Jack Hunter wrote on Facebook.

“As politics change, so can platforms. I began Rare Liberty because I believed there needed to be a right-leaning libertarian news outlet that reflected and spoke to the liberty faction within the Republican Party and conservative movement,” he added. “There still needs to be such an outlet. I haven't changed my mind about that.”

When someone commented on his Facebook post asking why Rare is shuttering, Hunter responded: “High up corporate decision that affected a number of outlets, not just Rare. Out of our hands. It happens sometimes in this line of business. I'm thankful for Cox providing the platform for as long as they did.”

According to Axios, which first reported the news, the demise of Rare.us is another example of a viral site built on Facebook’s traffic that could not survive the platform’s algorithm change to its News Feed, now prioritizing posts from friends and family over publisher content.

Last week,LittleThings — a site dedicated to uplifting and empowering content for women — announced it was shutting down, following a deadly decline in Facebook traffic after the platform’s algorithm change.

According to LittleThings’ CEO Joe Speiser, the site experienced a 75% drop in traffic.

Rare.us published a mix of aggregated and original content for conservatives, ranging from news, politics, entertainment and lifestyle topics.