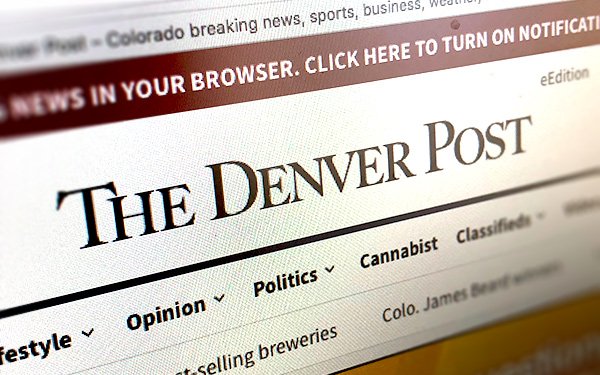 The Denver Post is cutting about one-third of its newsroom. The first 25 people will be let go by April 9. An additional five positions will be eliminated by July 1.

The Denver Post brought back its paywall in January, hoping it would help sustain the newspaper’s business.

At the time, editor-in-chief Lee Ann Colacioppo told Columbia Journalism Review there was no guarantee from parent company Digital First Media that revenue generated by the new paywall would deter future newsroom cuts.

“The best I can say: If we meet our subscription goals, we would expect it would stabilize our business and would allow us to stop the bleeding,” she said at the time. “That’s the entire intent, that’s what we’re doing it for.”

"The hedge fund that owns this incredible paper has already slashed so many jobs," tweeted Jack Healy, the Rocky Mountain correspondent for The New York Times.

The Denver Post lost 10 employees in December and made devastating cuts to staff in 2015 and 2016.

Denver Post CEO and publisher Mac Tully abruptly announced he was leaving the company at the end of January.

“I’m not ready for retirement yet, but after 40 years in the industry, I’m ready for something a little less stressful,” Tully wrote in a memo to staff at the time.

The newspaper had 300 employees a decade ago.

Last month, MediaNews Group also made cuts to another of its publications, San Jose-based Mercury News.

Colacioppo informed staff of the impending layoffs in a Wednesday newsroom meeting. Photos online of the meeting show Denver Post employees covering their mouths and faces in shock, some with their heads in their hands, and others consoling one another.

“These job losses are painful, and we know meaningful work will not get done because talented journalists have left the organization,” Colacioppo wrote in a memo sent to staff after the meeting. “I’m sure some commenters will cheer what they believe is the eventual demise of the mainstream media, but there is nothing to celebrate when a city has fewer journalists working in it.”