Study: Journalism's Use Of Virtual Reality Can Increase Empathy 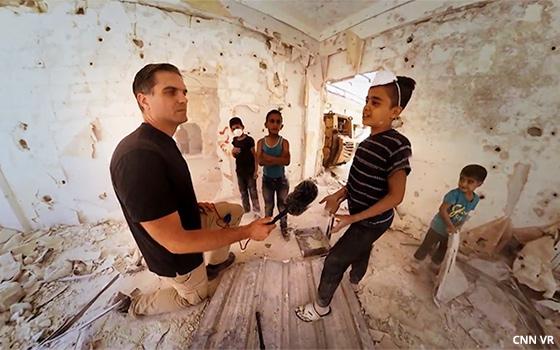 With the rise of more sophisticated technology, journalists and news organizations can harness the power virtual reality to deepen story-telling and attract new readers.

The impact of enhanced reporting, specifically with the use of 360° immersive video, has been known. But now, the Tow Center for Digital Journalism has released the results of a study showing how this type of technology effects viewers and influences their levels of empathy for a subject.

Researchers Dan Archer and Katharina Finger compiled the results of 180 people in New York City who were given either a text-based narrative, a non-immersive desktop-based version of the story, or subjected to an immersive video experience.

The researchers showed three stories to subjects: “Seeking Home,” about a refugee camp in Calais, France; “Growing Up Girl,” a short showing “a day in the life” of a Sub-Saharan African girl; and, “Act in Paris,” focused on the threat of climate change.

Participants, made up mostly of well-educated millenials, were given a short interview following their reading or immersion experience, then the researchers followed up two to five weeks later to further gauge the impact each type of story telling left.

What they found was anticipated, but with a few twists.

Those who viewed the videos did feel a stronger connection to the subject matter, but with some caveats.

One, viewers who consumed news less often were found to feel greater empathy for the subjects of the pieces. Further, if a human led the story, subjects were more likely to feel a connection. “Act in Paris” featured a voice-over by actor Jared Leto, leaving viewers cold without a human to connect with.

The study also concluded that viewer enjoyment was paramount to connection with the VR experience.

Subjects who experienced the stories in an immersive setting were also said to be interested in taking action and getting involved with a related cause.

With outlets like The New York Times entering the world of VR, and many others joining it, the case for quality, impactful immersive journalism will only grow stronger. (The NYT introduced an augmented reality aspect to its Olympics coverage this year, among other endeavors.)

This latest study illustrates some of the ways in which the biggest stories happening in the world might better reach their audiences to elicit real engagement.