The Limits Of Ads.txt As A Fraud-Fighting Tool

The IAB’s Ads.txt initiative is a worthwhile endeavor in helping advertisers ensure that they are only buying ad inventory from the publishers they intend to. Of particular note is just how successful the push for Ads.txt adoption has been thus far, with soaring adoption rates and some trade groups going so far as to say that Ads.txt adoption will be the only way to receive certain certifications.

In an ideal state, once adoption achieves a critical mass, Ads.txt will diminish domain spoofing by providing transparency into a publisher’s legitimate sell-side partners. However, Ads.txt is not a panacea for ad fraud, and its success will be determined by the types of publishers that support the effort. Even if transacting on the Ads.txt file, there are still several key factors and issues that advertisers must continue to monitor.

While adoption is growing, there’s a divide between which publishers are and aren’t adding the Ads.txt file. Analysis of the Alexa Top 10,000 shows that adoption rate declines toward the bottom of the list. Adoption is 33% among the top tenth of the Alexa Top 10,000 sites, compared to 21% for the bottom tenth. It’s also worth noting that there is no correlation between the number of visitors on a site and the number of sellers on an Ads.txt file.

The long-tail is a vital source of inventory for buyers leveraging audience data and automation, yet a smaller percentage of those sites have joined the initiative to date. While it’s still early days, it’s clear that Ads.txt presents issues for smaller publishers. First, adoption limits the number of places that inventory is sold, which can restrict revenue. Secondly, the files require constant management and updating whenever a publisher adds or subtracts partners. Those that aren’t agile enough create an opportunity for a reseller to take advantage of the outdated file, either by reselling inventory to which they should no longer have access or domain spoofing impressions. 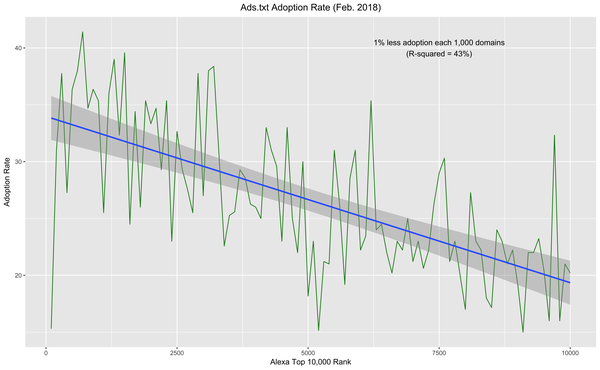 Many of the complaints about online advertising -- and programmatic transactions in particular -- is that there are far too many intermediaries between the advertiser dollar and the publisher impression, with each one shaving off a percentage. Unfortunately, Ads.txt is still vulnerable to bad actors looking to take advantage of this transaction chain.

Sellers that manage to get on a publisher’s Ads.txt file still have the ability to spoof domains. Among publishers in the Alexa top 10,000 that have adopted Ads.txt, roughly 70% of the lines in the Ads.txt file are resellers. In other words, resellers are quite common across Ads.txt files, presenting an opportunity for a less-scrupulous reseller to abuse their access for their own gain.

Part of the reason domain spoofing has become such a core focus in the fight against fraud is that it hurts both the advertiser and the publisher. It was a large issue throughout 2017, but it would be foolish to think of it as the only problem when one of the oldest fraud tactics, bot traffic, still remains a nuisance.

When botnets trigger impression calls for inventory that will never be seen by actual, living humans, the advertiser’s spend goes to waste. Even if Ads.txt files are in place, invalid traffic can still be monetized on sites that are not associated with domain spoofing and have the Ads.txt file implemented.

All in all, ad buyers still need to look out for the latest bot traffic tactics and schemes, which will continue to evolve, no matter how popular the Ads.txt initiative gets. Plus, the market should not forget that other fraud types remain prevalent.