Minorities Are Still A Distinct Minority Among CMOs; Women Do Better 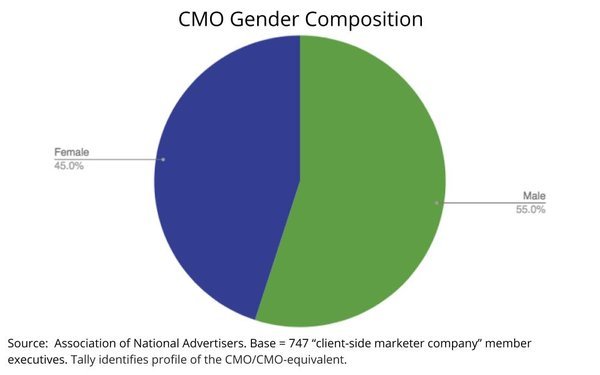 There is work to do. That’s one of the conclusions to be drawn from a new scorecard of ethnic and gender diversity in the ranks of chief marketing officers. The new survey, released today, was tallied by the Association of National Advertisers.

While female CMOs make up 45% of all the top CMO spots at 747 client-side marketing company members, only 13% of the head marketing executives at those companies are black, Hispanic/Latin or Asian.

In a statement, ANA CEO Bob Liodice said, “For too long, we’ve relied on inference and innuendo rather than hard facts and data. We’ve now planted a ‘stake in the ground’ against which we can begin to track our progress annually. But knowing these results is just the first step. We need complete commitment throughout our industry to create lasting change.”

The glass ceiling for women seems to have been broken most often — and perhaps surprisingly — in the sports and entertainment segment, where 27 women, or 60%,  have the top job, compared to just 18 men. In the banking and finance sector, 47 of 88 chief marketing officers, or about 54%,  are women.

It appears that the food and beverage industry has the worst percentage of female CMOs — just 25 of 77, or less than a third. In the consumer goods business, half of the 42 CMOs are women. And in the technology business, 23 out of 50 are women.

The stats for African American, Hispanic/Latin and Asians are  more dismal. There is not even one Hispanic CMO in the banking and financial sector, and just one each in the sports and entertainment and CPG branches. (But in the food and beverage industry, there are six.)

Not even one black marketing chief reigns in the technology sector. In all, there are not more than three black CMOs in any of those business categories.

Comparatively, Asian CMOs seem almost plentiful. There are six in CPG, four each in tech and banking, and three in food and beverage. In sports and entertainment there is just one Asian CMO.

The ANA’s Alliance for Family Entertainment’s #SeeHer campaign hopes to improve the portrayal of women and girls by 20% by 2020, the 100-year anniversary of women gaining the right to vote.

And the ANA’s Alliance for Inclusive and Multicultural Marketing has enlisted nearly 70 companies, working to improve diversity and multicultural marketing by working with experts from diverse communities to help create a multicultural “marketing blueprint.”

If it’s any consolation to marketers, women or minorities, things at the very top of corporate America are much, much worse.

At the beginning of 2018, there were 27 female CEOs among the Fortune500, due to a drop to 23 by April because of retirements. There are only three black CEOs, reduced by one from the year before, Atlantic.com reports, after American Express CEO Ken Chenault retired on Jan. 31.