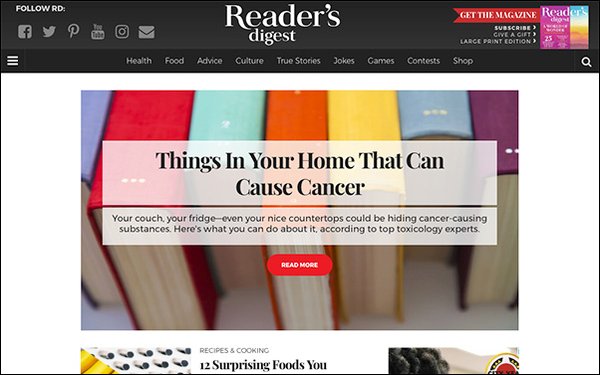 Unique visitors to Reader’s Digest’s website in February 2018 reached 11.7 million, a 179% increase from the same period in 2017, according to comScore numbers cited by parent company Trusted Media Brands.

Reader’s Digest, which publishes lifestyle, health and wellness content, is now one of the top 10 magazine brands measured by the latest Magazine Media 360° report from MPA – The Association of Magazine Media. It included 119 magazine media brands from 27 companies.

Reader’s Digest reaches an average audience of 19 million, according to the report.

The Trusted Media Brands title had the highest year-over-year mobile web growth among the magazines in the report, with a 286% increase in audiences consuming Reader’s Digest content on mobile in February 2018 versus February 2017.

The magazine industry as a whole also experienced growth in the mobile web platform, with a 7.6% increase in February 2018, compared to the same month a year ago, according to the MPA report measuring magazine brands’ audiences.

About half of all the brands in the report experienced growth in mobile web magazine audiences, which are unique visitors that visit a site on a mobile device.

Nearly 50% of the brands measured showed growth of 8% or more.

MPA believes this growth is also the result of a full year of reporting occurring since the first of two comScore methodological changes in 2017.

The Family Handyman and Taste of Home, two of Trusted Media Brands’ other titles, also attracted more audiences in February 2018 compared to the same month a year prior.

“Our consumer-first approach utilizing focused UGC content, has enabled us to effectively and strategically grow our digital audiences across all of our platforms,” stated Bonnie Kintzer, Trusted Media Brands CEO.