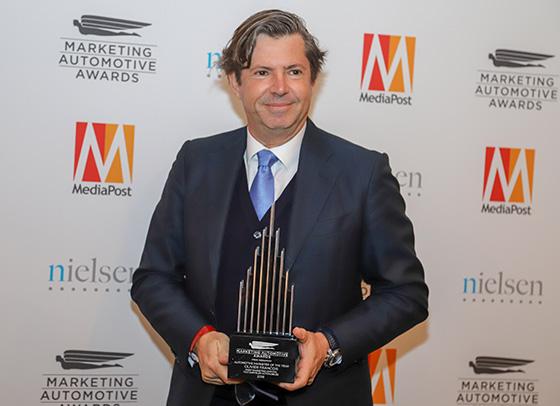 “In 2017, like in every year, we tried to be different,” Francois told Marketing Daily during an exclusive interview at the New York International Auto Show. “We tried to be bold, we tried to create connections, and to do that, we used a wide range of solutions, from Sesame Street to Vin Diesel, from the Vikings to the dinosaurs of Jurassic Park.”

Marketing is not only advertising. A partnership the automaker recently announced with Apple will help it make “another unforgettable connection with our customers,” he says.

Francois was honored by MediaPost as its automotive marketer of the year. Two FCA brands in Francois’ charge — Alfa Romeo and Dodge — also received awards for best campaign and best viral marketing.

In reflecting back on the 2017 efforts which garnered him the award, Francois highlighted the Jeep Renegade “Release Your Renegade” campaign, which featured music from both established and up-and-coming artists.

“We tried to innovate in the way we use music,” he says. “The pitch was, we wanted to connect Jeep with Millennials. This is a tough crowd and for them, the mere product or feature or price message is not enough to be legit. You won’t connect with just an ad. So we came up with this music-based campaign and, yes, it helped us to be legit.”

But Francois says music is not his “mantra.”

“It’s a good tool to boost engagement and relevance, and I think we have learned how to use it, but it is certainly not the silver bullet,” Francois says.

A partnership recently announced with Apple is another way to engage.

Starting May 1, FCA is offering customers up to six months free of Apple Music with the purchase of any new Chrysler, Dodge, Fiat, Jeep or Ram vehicle with standard CarPlay support. The yearlong initiative runs from May 1 through April 30, 2019.

The package puts together Apple CarPlay and a premium audio system by Beats Audio.

“‘So, as you can see, it is not about music,” he says. “It is about disruption, it is about innovation and it is about leadership.”

When it comes to agency partners, Francois describes himself as “extremely hands-on,” as are other senior executives “from top to bottom, and ‘top’ includes our CEO. So our agencies receive very clear direction as to what to look for and where to look.”

He says his goal is to keep changing and innovating.

“Great marketing, I think, is all about creating your own sandbox, and then to be bold enough to move the sandbox each time a competitor steps in,” he says. “Sure, this take a lot of passion, imagination and hard work, and I am certainly not asking my agency partners to do all that alone. We are a very different client.”