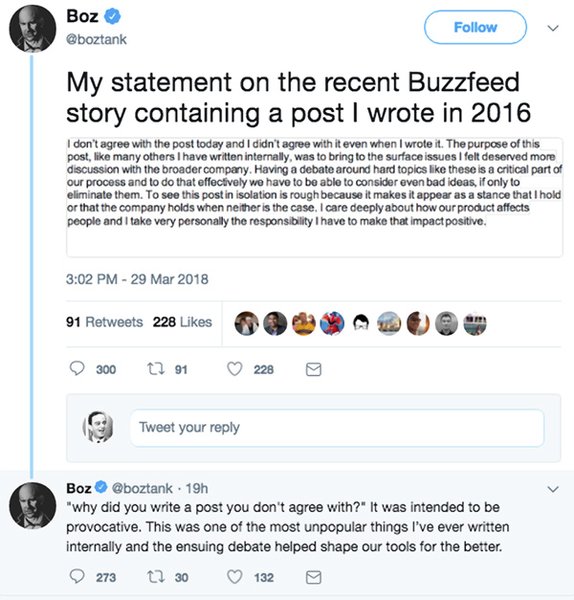 "We connect people … Period,” Andrew “Boz” Bosworth, a Facebook vice president, wrote in a June 2016 post just published by BuzzFeed. “That’s why all the work we do in growth is justified.”

Added Bosworth: “Maybe it costs someone a life by exposing someone to bullies. Maybe someone dies in a terrorist attack coordinated on our tools.” But bottom line, “we connect more people.”

Both Bosworth and Mark Zuckerberg have since disavowed the now-deleted post, but Facebook’s CEO still felt the need to defend his lieutenant this week.

“Boz is a talented leader who says many provocative things,” Zuckerberg stated.

Further, Zuckerberg insisted that Bosworth’s original message does not reflect Facebook’s corporate mission, or his own personal thinking.

“This [idea] was one that most people at Facebook, including myself, disagreed with strongly,” according to Zuckerberg. “We’ve never believed the ends justify the means.”

Of course, Zuckerberg is looking far less believable in the wake of the Cambridge Analytica controversy.

Among others looking for more answers from Zuckerberg regarding Facebook’s business practices, the Federal Trade Commission just made its investigation into the company official, attorneys general from 37 states and territories are now demanding answers.

Lawmakers on the Senate Judiciary Committee want Zuckerberg to testify at an upcoming hearing on data and privacy.

While many still see Facebook as too big to fail, analysts are increasingly losing patience with the tech titan. “Shame on Facebook,” Forrester’s Jessica Liu says in a new note.

At least in the short term, however, those predicting Facebook's impending doom are overreacting, according to Liu.

In fact, Forrester’s ConsumerVoices research shows that while users are acutely aware of Facebook’s recent “hacking” and data exposure problems, most respondents say their usage has not changed as a result -- and, if it did, the shift was not a result of the network’s recent failings.

Bigger picture: Facebook still has roughly 2 billion users, and Forrester forecasts that its services -- including Instagram, FB Messenger and What’sApp -- are on track to grow 25% from 2018 to 2019.