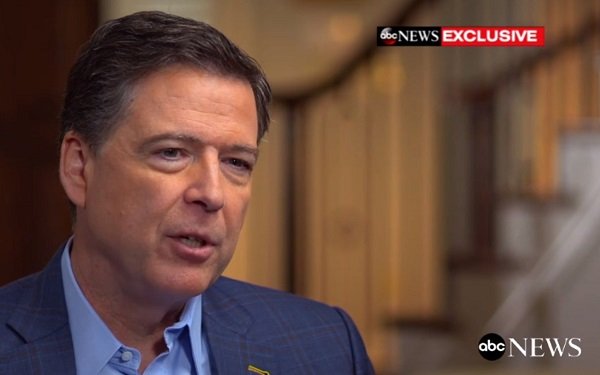 President Trump's tweet attack against James Comey reminds me of a valuable aphorism that a former editor imparted to me at a formative time in my career about the interplay between journalists and their subjects.

On that day some 30 years ago, I was a little shaken by a phone call I had just received in which a publicist at a radio station in New York lambasted me for a story I wrote. The story cast partial blame on the station’s management for a fatal helicopter crash in which the station’s traffic reporter was killed.

When I mentioned the phone call to my editor, he said to me: “The louder they yell, the more accurate your story probably was.” I cannot tell you the number of instances in which that adage has held up over the years.

President Tweetstorm’s reaction to Comey's new book and the interview he did on ABC Sunday night seems like the same classic reaction.

Comey evidently struck a nerve as the president laid into him with repeated insults on Twitter on Sunday. “Slippery James Comey, a man who always ends up badly and out of whack (he is not smart!), will go down as the WORST FBI Director in history, by far!” read one tweet posted by the President of the United States.

“I never asked Comey for Personal Loyalty,” the president railed in another tweet. “I hardly even knew this guy. Just another of his many lies. His 'memos' are self-serving and FAKE!”

This tweet was a reference to a portion of the Comey interview, ably conducted by George Stephanopoulos, in which Comey (seen in the photo above) told the story of a private dinner he had with Trump in the White House -- just the two of them -- in which Trump asked for Comey’s loyalty.

Comey demurred at first, telling the President that he would certainly always be honest with him. Then Trump offered a compromise of sorts, a concept he devised on the spot that was a combination of honesty and loyalty -- something he called honest loyalty -- which Comey halfheartedly accepted (according to Comey's version of the story). Incidentally, the two had shrimp scampi, according to Comey.

Trump issued a few other tweets as well on Sunday in which he described Comey as “disgruntled” and called him a “slimeball” (for the second time in a matter of days).

Trump even referred to Comey's book, titled “A Higher Loyalty: Truth, Lies and Leadership,” as “Comey's badly reviewed book,” although one gets the sense that Trump has probably never read a review of this book or any other one in his entire life (except maybe his own).

Although I am far from the first commentator to hold this opinion, I must say that this particular tweet explosion from the President is one of the most immature that I have yet seen from him, which is saying a lot.

"He is not smart!” thundered the President, sounding like a child.

"The WORST FBI Director in history, by far!” Trump declared of Comey, again sounding like a child declaring in a tweet or a text to a friend about a teacher or classmate, “He’s the WORST!!”

Well, maybe Comey is the WORST or maybe he isn't. It's just that given all the time that the President seems to spend tweeting, it is doubtful he has ever actually read about or researched the subject of past FBI directors and their histories in a manner sufficient to rank them as worst, best or in between.

In these tweets (and hundreds of others), the president comes across as a man who is totally unglued. Say what you will about Comey and his performance on ABC Sunday night, but at least you can say of him that he did not come across as "out of whack."

Those words, used by the President to describe Comey, can more accurately be applied to Trump himself -- which means that in the strange and bizarre competition between the two men, Comey was the winner Sunday night.

All Trump could come up with were schoolyard taunts, while Comey made headlines in the hours after the interview with his opinion that Trump is not fit to be president and a bunch of other things that he and Stephanopoulos talked about.

You might have even concluded that some of the ways Comey explained his actions made him seem a little squirrelly -- not to mention calculating -- particularly in the interview portions about his meetings with Trump and his decisions about making various public pronouncements that almost certainly affected the outcome of the 2016 presidential election.

Still, unless you were Donald Trump, this was a great show for a Sunday evening. Whether this hour of prime time will help Comey sell books is anybody's guess.