Hannity Lawyer Revelation Is Like Raw Meat For Rivals 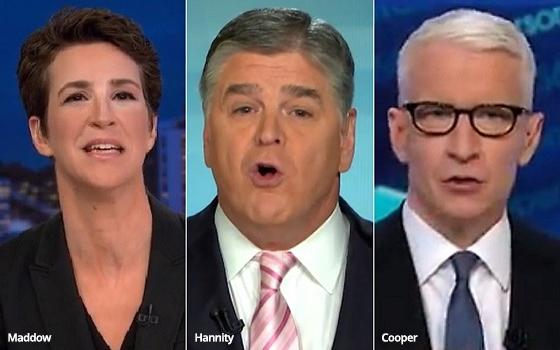 Gloating is not a nice thing to do in the face of someone else's misfortune, but you could hardly blame Rachel Maddow for the glee she displayed Monday night in the wake of the Sean Hannity revelation that shocked all news media.

Earlier in the day, Hannity was revealed as the mysterious third client of embattled Trump attorney Michael Cohen.

Cohen's New York apartment and office were raided last week by the FBI, who collected paper and electronic files -- along with “electronic devices” that one can assume are computers and the like.

The news that Hannity might have had an ongoing lawyer-client relationship with Cohen (which Hannity denies) during these weeks in which Hannity (and everyone else) has been covering the Cohen story was jumped on by his rivals like a hungry dog jumps on raw meat.

MSNBC's Maddow, who competes directly with Hannity at 9 p.m. Eastern every weeknight, was positively incredulous.

“In court today, we got the name of Cohen's third client made public, and honestly, don’t even ask me to tell you what it means [laughs], but it's Sean Hannity from the Fox News Channel!” she said.

Maddow took a decidedly “can you believe this?” attitude. “Don't even ask me! I have no idea!” she said with obvious ecstasy over what had happened to her right-wing competitor.

“This is like every day you get up, you take a shower, you get dressed, you go out to the driveway to start the car. Every day it's the same.... except today, you got in the car, you put the key in to the start the engine … and today, this time, the engine didn't start and instead terrifying circus music started playing and the hood flew up and clowns and monkeys and elephants flew out instead. Like, what? It's who? [Laughs again].”

She then did a fine job describing the proceedings inside the courtroom leading up to the moment when one of Cohen's lawyers was ordered to reveal the secret client’s name -- and it was Sean Hannity.

“This has been a very weird day in the news,” said Maddow for the second or third time. “One of the anchors at the major pro-Trump news network has had an undisclosed relationship with the president's lawyer all this time, while Fox has not told that to its audience, while Mr. Hannity and Mr. Cohen have apparently spent considerable effort trying to keep that relationship secret. What? That’s just lurid!”

Over on CNN, Anderson Cooper made the same points, but he did so with fewer words and less drama.

“So it seems that Hannity and the president share more than frequent dinners and phone calls and a mutual love of Fox News programming. They also share an attorney,” Cooper said on “AC360.”

“Sean Hannity is already starting to fuss and fume that the media is going crazy with all this and insists that there’s no there there,” Cooper said. “Perhaps there isn’t, but not disclosing a business or legal relationship with someone you report on and have had on as your guest at least 16 times since Donald Trump declared his candidacy -- that doesn’t sound either fair or balanced.”

For his part, Hannity fussed and fumed about all the media attention on his Fox News show and his syndicated radio show on Monday.

“Predictably, without knowing all or any of the facts, the media went absolutely insane, [with] wall-to-wall, hour-by-hour coverage of yours truly,” said Hannity on Fox News, as he segued to a montage of clips where his name was mentioned dozens of times on the other news channels.

“Am I surprised by any of this? Of course not -- because this is what the media in this country does,”  he said.

Hannity's reaction is hilarious, of course, because if it had been any of his rivals getting jammed up the same way, you can bet your bottom dollar he would gloat just as gleefully as Rachel Maddow.

He then went on to say that Cohen is not really his lawyer in the sense that Hannity has ever received a bill from Cohen or paid him for any legal advice or counsel. Hannity says he asked him some real estate questions. Apparently, Cohen was working pro bono that day.

Hannity evaded the central issue, however, which is how he, as a journalist and commentator, could not have realized that any relationship at all with this lawyer -- paid or otherwise -- would reflect badly on him, or that Hannity had an obligation to divulge the fact of that relationship.