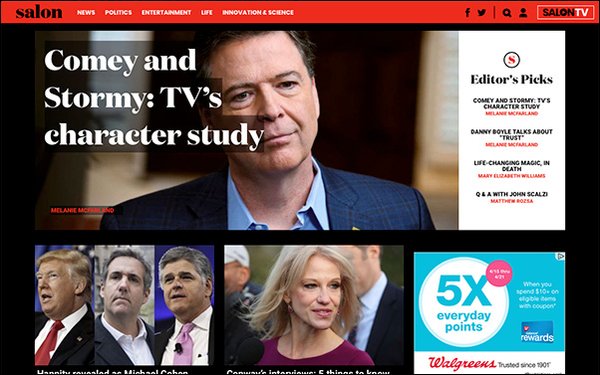 AdLedger, a nonprofit group of ad and publishing executives working to develop blockchain standards for digital advertising, will run a media campaign with Salon Media as the publisher (which will donate impressions) and IBM as the advertiser and technology provider on a blockchain.

The aim is to show that blockchain can help bring 100% transparency and data security to advertising, according to AdLedger.

“As an advertiser, we know better than anyone that the current digital advertising system is broken,” stated Chad Andrews, global solutions leader of advertising at IBM. “Blockchain can help our advertising dollars go further by eliminating unnecessary intermediaries, and combining disparate sources of data and reconcile immediate metrics based on measurement KPIs tied to campaign delivery.”

AdLedger has a consortium to help develop rules and standards for blockchain in advertising. IBM and Salon Media are members, as are GroupM, IAB, iSpot.tv, MAD Network, Publicis Media and TEGNA.

Members at the consortium’s inaugural meeting voted campaign reconciliation and auditing as some of the biggest issues in the industry, Cacciapuoti said.

AdLedger is running this proof of concept to “prove a media campaign from start to finish through blockchain. ... And hopefully illuminate the supply chain,” Cacciapuoti said. “What blockchain does well is share information between multiple parties in a really transparent way.”

The project also lets AdLedger’s members get a hands-on experience with blockchain and understand the technology “at its core,” without buying any software, she added.

The campaign will run for about a month to get enough significant data. Then AdLedger’s consortium will meet to see “what they solved for, how do we standardize that and how do we create rules for that,” Cacciapuoti said. The findings will then be presented in a white paper.

Salon Media COO Ryan Nathanson helped spearhead the campaign, which will focus on video media, “given that side of the business is the most victimized by fraud,” Cacciapuoti said.

"This proof of concept will not only help publishers like us regain more control over our inventory, but will also illuminate where inefficiencies exist within the long and complex supply chain," stated Nathanson.

In a video explaining the project, Cacciapuoti said if AdLedger is successful in implementing blockchain to the digital media supply chain, “brands will get more working media per dollar, publishers will get a fair price for their inventory, and consumers will get messaging that is actually relevant and useful to us.”

AdLedger is working on another campaign, too: a blockchain-backed solution for GDPR compliance specifically for publishers.