Nintendo Labo And Cardboard: What Do You Make Of It? 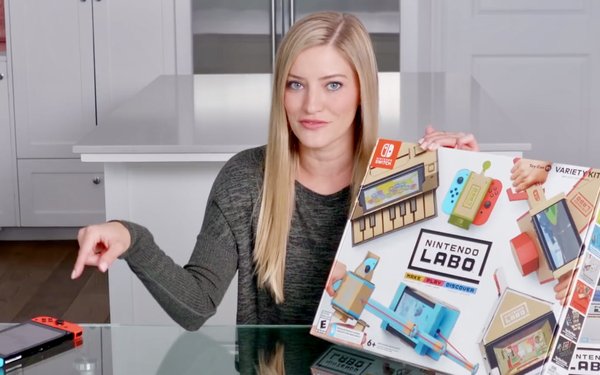 Nintendo today brings to market its new Nintendo Labo, a kit that encourages a combination of gaming skill and cardboard model-building. It lets kids “build” a toy working piano, a little car or a robot they can maneuver and then watch on a TV screen. A Nintendo screen gives them the step-by-step building instructions.

The combined effect is old-school cut-and-fasten assembly forms like toy car kits from the 20th Century and right-now tech like the use of IR cameras to guide the car and robot.

To help market Labo, Nintendo enlisted “Science Guy” Bill Nye to build the car and customize it, and then create a bunch of other stuff in the so-called Toy Con Garage.

Nintendo also launched a website inviting user-generated content, and a contest for the best DIY contraptions. Users have to be at least 13 to enter.

Nintendo says Labo is built on three premises: To transform the “modular sheets of cardboard into interactive creations called Toy-Con”; to play with the stuff using the separate Joy-Con controllers and Nintendo Switch console; and to discover new ways to use the combination of products to invent your own things.

It’s not inexpensive. To truly use Labo, users should first own Nintendo Switch, the gaming console whose main feature is its portability, for taking it from the living room TV to the car to anywhere else. That costs $300. It comes with two Joy-Con controllers but if you need more, they list for $80 for a set of two. (You need the Joy-Con devices, because, for example, their vibration powers the cardboard car.)

The new Labo Variety kit will retail for $70. A separate Labo Robot kit lets you  build a wearable robot suit, including a backpack and visor. That allows you to assume control of a huge on-screen robot, and smash buildings and UFOs while you’re in Robot Mode. The Variety kit also has the cardboard and on-screen instruction to build a fishing rod, a motorcycle and a house.

“As with anything we do at Nintendo, our primary goal with Nintendo Labo is to make people smile,” said Doug Bowser, Nintendo of America’s senior vice president of sales and marketing, in a statement.

Nintendo refused to divulge any other marketing plans but early toy reviews — some of which have been raves — wonder how Nintendo will be able to explain what Labo really does. That’s probably why Nye’s presence, the unpacking videos and the UGC contest won’t be just promotional but instructional, too.