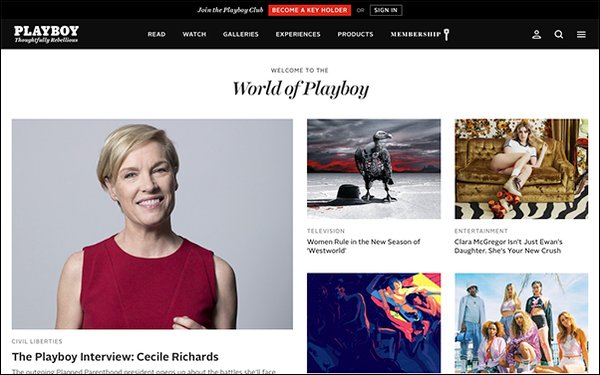 Today, Playboy unveiled a new website that taps into the exclusive reputation of its Playboy Club, creating an online iteration of its real life counterpart.

As part of the new website rollout, all site visitors are required to register. They can become a Playboy Club member for access to exclusive content and events.

New premium content available only to members includes a new collection of video series including: The New Creatives, which offers a look into the lives of disruptors and visionaries; A Moment With featuring a Playboy ambassador letting members gain a closer look at her life; Playboy’s Speed, a car-focused series featuring automobiles with the brands official stamp of approval; 20Q adapted from the print edition featuring chats with celebrities; and Topless Chef, a new spin on the traditional cooking show.

Membership includes access to events like the Midsummer Night’s Dream party and premium access to the 40th annual Playboy Jazz Festival hosted at the Hollywood Bowl.

Members also have access to pre-sales of Playboy products, such as one-off collectibles and “marquee collaborations.”

Cooper Hefner, Chief Creative Officer of Playboy Enterprises, Inc., stated: "For months we have been creating a new, unique digital and mobile experience for Playboy fans, one that successfully communicates the entire story of our brand.”

Lately, digital outlets have been finding success with membership programs. Slate has long relied on its program to connect with its most dedicated readers. The Atlantic also launched a successful program last year.

Earlier this month, Playboy re branded itself with the slogan, “Entertainment for all,” in an attempt to expand its audience, as the brand migrates emphasis away from print and focuses on digital content.