Thriller On Ice: 'The Terror' On AMC 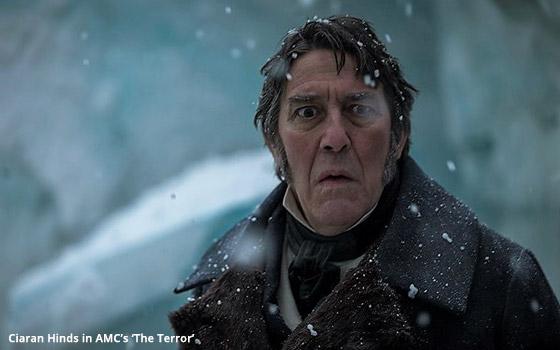 In olden days, a TV critic planned his coverage of new show premieres according to a rigid schedule.

We knew the premiere dates and we planned accordingly. Our thinking was that our readers would benefit most by coverage of new, upcoming shows that would appear in the pages of our newspapers or magazines within, say, a week or less before their debut.

Years ago, when I complained one morning that the TV department of the newspaper I was then working for had no ideas for stories for the next day’s paper, an editor looked at me and asked a simple question: “What’s on tomorrow night?” His advice: Just contrive stories on whatever’s on -- which is what we did on days when all else failed.

That strategy certainly seems quaint and old-fashioned today, but using the “linear” TV schedule is still a credible way for a TV critic to remain organized and produce reviews that are more or less timely.

And for their part, the network publicity departments still make the premiere episodes (and some subsequent episodes) available for critics to watch in advance of their premiere dates.

While there are still vast swaths of people who watch TV according to the time schedule, we also know that there are many who watch TV shows according to schedules they make up themselves, using the various methods that are now available for doing this.

This is a way to explain why I am now getting to this TV Blog about “The Terror,” a drama series that premiered on AMC on Monday, March 26.

The reason the show didn't get covered back then: The new “Roseanne” was set to premiere the very next day, and all things considered, “Roseanne” was the stronger topic for Monday's TV Blog that week.

Since the ability exists to watch “The Terror” (and any other show) whenever one feels like it, there is really no problem with writing on it and recommending it halfway into its premiere season.

For the record, “The Terror” airs Monday nights at 9 p.m. Eastern on AMC. Next week's episode will be the season's seventh. All 10 of the season's episodes have been available on AMC's streaming service, AMC Premiere, since March 26.

It is the kind of show that lends itself to binge-watching -- an engrossing, suspenseful thriller about oceanic exploration in 1845, and a mysterious malady (or unknown beast) that appears to be attacking the crew members of two English ships stranded in the polar ice in the far reaches of North America.

The captains of the two ships are played by Ciaran Hinds (pictured) and Jared Harris, who are both superlative.

The show's best feature is the way it re-creates the perilous world of 19th-century exploration and discovery. This is not a realm that is commonly depicted on TV, which is a major reason why this show stands out.

As an illustration of how word of mouth and publicity work these days, I had forgotten that I had skipped this show last month, but more recently came across a story in one of the trades in which Hinds’ performance in particular came in for praise.

The story made me curious enough to watch a few episodes of “The Terror” with the happy result that the show emerged as one well worth recommending. That is a gamble when considering shows to watch for TV columns, particularly so long after their premieres.

The last thing a TV critic wants to do is waste two hours or more watching a few episodes of a show only to come away realizing the show is not worth writing about.

Fortunately, however, “The Terror” is one of the most attractive and eerie shows of 2018. Watch it whenever you feel like it.