When You've Got All Your Email Pistons Running 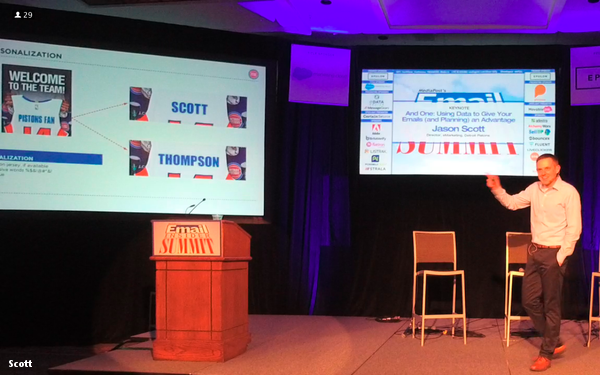 “Why are we holding email up to such a high standard?” Jason Scott, director of eMarketing for the NBA’s Detroit Pistons, asked the crowd at MediaPost’s Email Insider Summit during his opening keynote this morning.

What he actually meant was that some marketers treat email almost too preciously and therefore don’t extract its full value. Specifically, he made the case for integrating more of a brand’s digital content into its outbound email marketing campaigns.

Scott demonstrated an array of incredibly dynamic -- and effective -- email campaigns his two-person email marketing team has deployed for the Pistons by leveraging real-time content published on the Pistons’ website.

“It’s great to have the most recent content,” he said, adding, “We may have a game that’s back-to-back, and we don’t want to send something from yesterday when we’ve played a game today.”

Scott said he’d love to incorporate AI to help the process someday, but he demonstrated how the Pistons’ method of multiple email campaigns tapping dynamic web content can approximate an AI-like experience the old fashioned way -- manually, by human beings.

“Using AI is great. I would love to use AI to do this, but this is a first step and it's a great way to get started,” he asserted.

Scott didn’t disclose exactly how much more effective the email program was for average fans, but he did provide some data for its impact on the Pistons’ “B-to-B prospecting”: its sales of season tickets.

Those sales must go through a sales rep, and there’s lots of schmoozing involved, including drinks, dinners and games.

The dynamic nature of the email marketing platform enables reps to discuss which games their prospects would like to see and then go into the Pistons’ CRM database to generate the appropriate email targeting them.

“Essentially, we create one invite that works for approximately one month. It’s a trigger-based email. As a rep feels they’re interested in a game, they trigger out.”

What’s the payoff? Scott said the Pistons have seen an “almost 8% lift in the RSVP of prospects that want to come out to games, which is huge. And we were able to involve the reps in the process.”