With some of summer’s biggest blockbuster films slated for release in the coming weeks, a recent survey finds that 21% of U.S. adults will not visit a movie theatre over the course of an average year. Among moviegoers, the majority will frequent a theatre between one and five times in a year (31%).

Just over one-half (53%) of survey respondents say that ticket prices prevent them from visiting a movie theatre.

Favored actors and actresses are the most common reason for moviegoers to choose to see a movie in a theatre (55%), closely followed by recommendations from family/friends at 49%. Oscar nominations appear to have the least effect, with only 22% citing this as a common reason for going to the movies. The genres most frequently seen in theaters are action and comedy (57% and 49%, respectively).

Males are more likely to be theatergoers, with 39% doing so more than 10 times a year, compared to 21% of females. Only 20% of those ages 65+ go to the movies more than five times in an average year.

Ticket prices are the most common hindrance, regardless of how many times a person reports going to the movies in a year (from not at all to greater than 25 times). Females are more likely to be deterred by ticket prices: 58% compared to 47% of males. The 18-24 age cohort is least affected by ticket prices (45%) while those between 35-44 are the most greatly affected (58%), according to survey findings.

Despite recent buzz surrounding MoviePass, only 12% of those interviewed currently subscribe to the movie-theatre subscription service. MoviePass provided subscribers with one movie ticket per day for a flat monthly fee, although MoviePass is now restricting moviegoers to four movies a month. 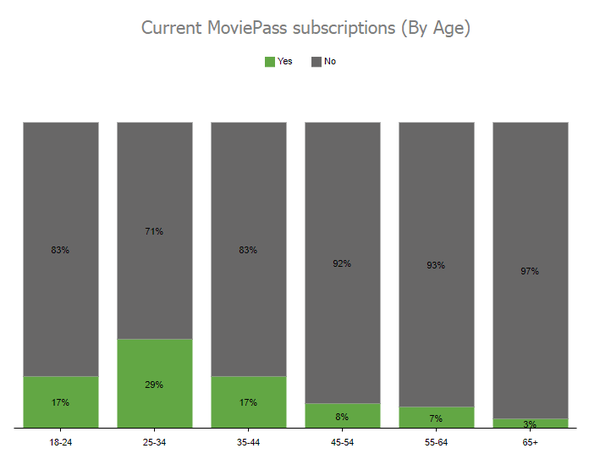 Regardless of movie theatre attendance, 56% of respondents use Netflix to stream movies, making it the most popular service. Following Netflix is Amazon Prime Video (32%) and Hulu (22%). Just 12% report using HBO Go to stream movies compared to 5% that use Showtime Anytime. Less than half of respondents ever rent movies through a cable subscription such as Fios or Comcast. Sixty-one percent of those who report streaming movies do so most often on their TV while 23% stream on their desktop/laptop most frequently.