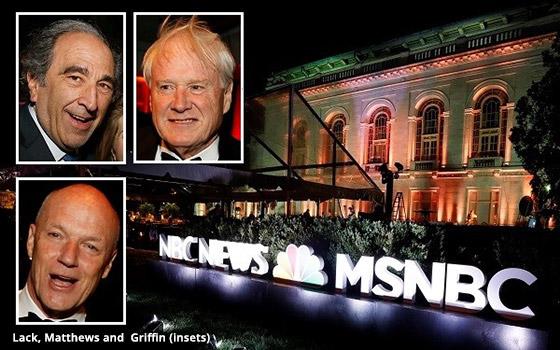 But that didn’t stop the well-heeled and tuxedo-ed honchos of NBC News and MSNBC from partying the night away in high style at their very own Versailles after the dinner was over.

The details came via a very illuminating email that arrived on Sunday evening from an NBC publicist, complete with a link to a treasure trove of more than 1,400 photos (if memory serves) -- an amount that in my 30-plus years as a journalist on the TV beat was likely unprecedented.

The photos provided an eye-opening look at the way the hard-working journalists at NBC News let their hair down, let off steam, spend the News Division’s entertainment budget, and at the same time, celebrate the First Amendment.

How do we know this? Because this email said so. “NBC News & MSNBC celebrated the First Amendment last night at their annual White House Correspondents Dinner After Party,” the email informed us.

This festival of First Amendment freedoms, hors d’oeuvre consumption and Johnnie Walker cocktail drinking took place at the sumptuous Art Museum of the Americas in Washington (pictured above), according to this missive from NBC.

While it may have seemed from the nearly 1,500 photos NBC provided that this evening of late-night partying was all fun and games, it was not, as rain threatened to put a damper on the festivities.

But, the NBC email reported, “Party goers persevered [italics added] through early rain for an evening of drinks, food and dancing that lasted until the wee hours of the morning.” Whew -- what a relief!

The dancing was aided by not one, but two DJs with funny names -- As One and Phenomenon, according to the email, which said the two were from iHeartRadio. One imagines that two DJs were necessary in case one got tired and needed a rest period. After all, you know what they say: At NBC News, the show -- and the dancing -- must go on!

Partygoers were also ensured of never going hungry or thirsty. As this email from NBC reported, Johnnie Walker was an enthusiastic sponsor of this post-White House Correspondents Dinner soiree.

“A packed house of guests enjoyed drinks by Johnnie Walker including signature cocktails of Black Label Old Fashioned, Johnnie Ginger, Ketel One Soda with cucumber and mint, and Johnnie Walker flights,” the email said. They sound pretty good, except for the cucumber cocktail. Those never work!

And by the way, does anyone who is reading this know what a “Johnnie Walker flight” is? Oh well, if you and I don’t know, you can bet your bottom dollar they know what it is at NBC News!

Lest anyone was in danger of getting tipsy on an empty stomach, there was plenty to eat at this NBC News post-roast. “Late night snacks included bite-sized nachos, pizza rolls, chicken and waffles, Tin Can lasagna, braised pork tostadas, fish and chips, cereal ice cream sandwiches, and mini ice cream cones,” NBC’s email said. Tin Can lasagna? That’s a new one!

The picture trove included photos of some of the food, scads of elegant crystal and dozens of the night’s party-hearty guests, including NBC News Chairman Andy Lack (photo, above left), MSNBC President Phil Griffin (bottom) and a tousle-haired Chris Matthews (above right).

There were even photos of MSNBC’s fun-loving foes feting the First Amendment such as CNN President Jeff Zucker and CNN talk-show host Don Lemon, who was seen in a photo (or perhaps more than one) with kooky comedienne Kathy Griffin, although she was banned from CNN’s New Year’s Eve Anderson Cooper show after she seemed to advocate the beheading of President Trump. NBC News vet Andrea Mitchell was also seen yukking it up with Griffin.

Who else was at the NBC News post-White House Correspondents Dinner all-night after-bash? I tried to identify others from the photos, but there were no captions, although the email clearly said “captions included.”

I even took it upon myself to inform the publicist whose name was on this email that there were no captions, but I received no reply. Oh well -- that’s news biz!