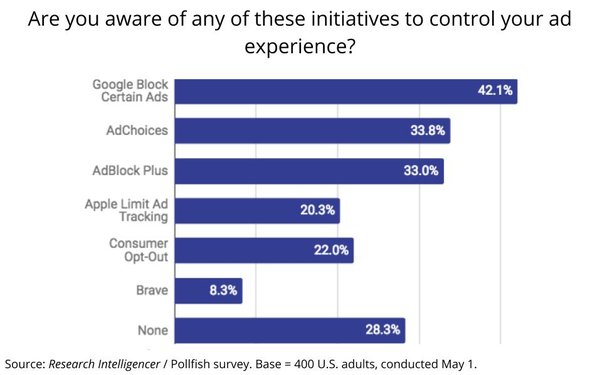 A survey of U.S. adults conducted by Research Intelligencer via Pollfish Tuesday found only 33% of respondents were familiar with Digital Advertising Alliance’s AdChoices option, while only one in five said they have used the program to opt out of behaviorally targeted advertising.

The survey, which also asked respondents about their awareness and use of other major indusry initiatives enabling consumers to control their digital advertising experiences, found Google’s Block Certain Ads feature is by far the most familiar and used.

Forty-two percent of respondents said they were familiar with Google’s Block Certain Ads feature and nearly a third said they have used it.

Third-party ad blocking software developer AdBlock Plus generated the next highest levels of awareness (33%) and usage (20%).

Overall, 28% of respondents said they were not familiar with any of the ad filtering/blocking programs and 43% said they have not used them.